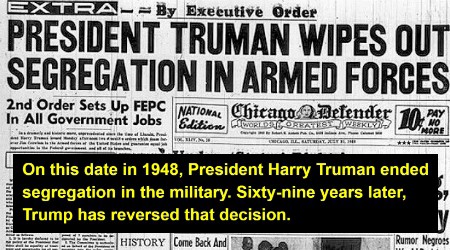 This is an act of astonishing and capricious cruelty. And it is likely to be the worst day of thousands of Americans’ lives.

On July 13, the House of Representatives narrowly voted down an amendment that would bar the military from providing transition-related medical treatment to transgender troops. Vice President Mike Pence championed the amendment but Defense Secretary Mattis, who supports trans service, vigorously lobbied against it. Two dozen Republicans ultimately opposed the measure, drawing ire from evangelicals and anti-LGBTQ activists. (Every Democrat also voted no.) It seems likely that following this vote, Trump realized he could seize upon the issue to rally his base. CONTINUE READING

A retired Navy SEAL Team 6 hero who is transgender had a message for President Donald Trump after he announced the US military would bar transgender people from serving.

“Let’s meet face to face and you tell me I’m not worthy,” Kristin Beck, a 20-year veteran of the Navy SEALs, told Business Insider on Wednesday. “Transgender doesn’t matter. Do your service.” CONTINUE READING

Christopher Ingraham, Washington Post: The military spends five times as much on Viagra as it would on transgender troops’ medical care

A Defense Department-commissioned study published last year by the Rand Corp. provides exhaustive estimates of transgender servicemembers’ potential medical costs. The Rand study estimated that these treatments would cost the military between $2.4 million and $8.4 million annually.

By contrast, total military spending on erectile dysfunction medicines amounts to $84 million annually, according to an analysis by the Military Times — 10 times the cost of annual transition-related medical care for active duty transgender servicemembers. CONTINUE READING

Just spoke to a Trump administration official about the transgender military decision. Here’s what they said… pic.twitter.com/eOWdvlxTfd

President Trump is most pro-LGBTQ rights @POTUS in history. Why’s that story not written in mainstream media? https://t.co/pRf9rCNKH3