Intel Report: Why I Will March for Science on Saturday 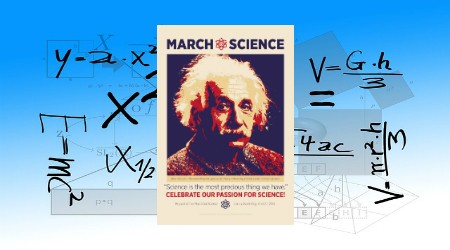 Laurie Garrett, Truthdig: Why I Will March for Science on Saturday

On Saturday, scientists and their supporters will leave the sanitized comfort of their labs and academic environs to march in Washington, D.C., and more than 400 other cities and 100 countries around the world… As a graying baby boomer, I shall march for the millennials who delight in analyzing DNA sequences, dream of studying cosmic rays from the space station, spend their summers measuring melting Arctic icebergs, test batteries of drugs in search of one that can pulverize HIV, climb inside dark caves to figure out what is killing the world’s bats, make antibodies that attack cancer cells, and study communication among elephants.

Although it is unusual for researchers to get involved in such vocal advocacy—something the march’s organizers have faced criticism for—those participating feel it is a necessary step to defend science. As the march’s mission statement explains, “People who value science have remained silent for far too long in the face of policies that ignore scientific evidence and endanger both human life and the future of our world. … Staying silent is a luxury that we can no longer afford.”

Michael Green, The Hill: Business leaders must stand up and ‘March for Science’ on Saturday

The business community needs to stand strongly and firmly on the right side of history — the side of science. Many of us — if not all of us — are listening to scientists, as business models rely deeply on realistic planning for the future. The future that business owners foresee includes a transition to renewable energy, energy efficiency and adapting to the realities of a climate-changed world.