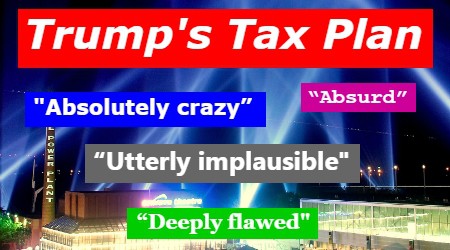 The Council of Economic Advisers argues that cutting the corporate tax rate from 35 percent to 20 percent would drive corporate investment and raise demand for workers, which would in turn boost wages. As a result, the report concludes that the average American family would see its annual income jump by $3,000 to $7,000—up to an 11 percent increase.

But Leonard Burman, a fellow and co-founder of the nonpartisan Tax Policy Center (TPC), says that’s “utterly implausible.” His colleague, Steven Rosenthal, says Republicans are giving away $2 trillion in corporate tax cuts while the White House “speculates” that wages will rise in the long run. “Trickle-down economics on steroids,” he says. “Absolutely crazy.” CONTINUE READING

Paul Krugman, The New York Times: The G.O.P. Is No Party for Honest Men

According to a new CBS News poll, almost 60 percent of the American public believes that the current Republican tax plan favors the wealthy. Some people see this number as a sign that the plan is in trouble; I see it as a sign that Republican lies are working far better than they deserve to.

For the plan does indeed favor the wealthy — overwhelmingly, undeniably. It’s shocking that as many as 40 percent of Americans don’t realize this. CONTINUE READING

With help from a new White House study, the Trump administration is trying to sell the idea that corporate tax cuts mean higher wages for workers. This is utter nonsense, and we — the people of the United States — know it because we’ve tested this idea a few times before.