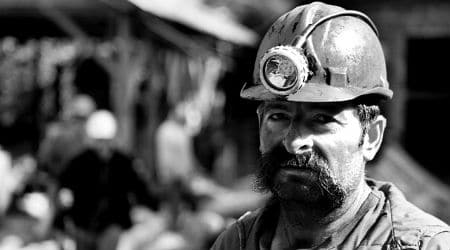 The White House has found a way to put the profit margins of select coal companies ahead of not merely climate sustainability, but also coal miners in Appalachia.

Donald Trump appears to set regulatory policy on a kind of reverse-utilitarian calculus, working diligently to do the greatest good for the smallest number. With the help of the congressional GOP, the president has made it easier for coal companies to dump mining waste in streams; given financial advisers the right to scam their clients; and made companies that routinely abuse their workers eligible for federal contracts again.

But with its latest deregulatory endeavor, the Trump administration has taken this governing philosophy to new heights: The White House appears to have found a way to put the profit margins of select coal companies ahead of not merely environmental conservation, climate sustainability, and federal taxpayers, but also coal miners in Appalachia. CONTINUE READING

Alpha Natural Resources filed for bankruptcy two years ago when the American coal industry went into free fall. Now a revamped version of the coal mining company is planning to go public on the New York Stock Exchange. And it’s giving a lot of credit to President Donald Trump for what it sees as its strong prospects.

“Trump” is mentioned 13 times in the filing, while “current administration” is cited another five times. Most of the mentions highlight Trump’s deregulation efforts. CONTINUE READING

Over the last 15 years, Bob Murray, the CEO of the Ohio-based Murray Energy Corporation, has sued everyone from local reporters to environmental activists to The Huffington Post. And after a recent broadcast, he added talk-show host John Oliver to that list.

On June 18, “Last Week Tonight with John Oliver” did a story on the coal industry. During the episode, John Oliver took aim at the practices of many in the coal industry, including both Murray and Don Blankenship, who was recently released from federal prison after being convicted of conspiring to violate federal mine safety laws. CONTINUE READING