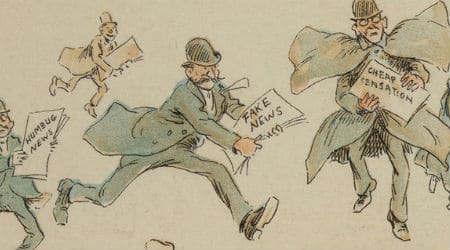 “Four hostile newspapers,” as Napoleon once said, “are more to be feared than a thousand bayonets.”

Over the long term, Trump’s war on the media could have real consequences. Public confidence in the press flatlined last year. Add to that a White House repeating week after week that the most accomplished media institutions in our country are phony—while at the same time embracing actual purveyors of fake news—and the danger requires no fact-checking to be evident.
Matt Wilstein, Daily Beast: Stephen Colbert Demolishes Trump for Insulting ‘Face the Nation’ Host John Dickerson

“Donald Trump, John Dickerson is a fair-minded journalist and one of the most competent people who will ever walk into your office, and you treat him like that?” Colbert told the president. Since Dickerson has “way too much dignity to trade insults with a president of the United States to his face,” Colbert decided to do it for him. “I sir, am no John Dickerson,” he said.
Robert Reich, RobertReich.org: The Authoritarian President

Donald Trump’s authoritarianism is a consistent and coherent philosophy of governing. But it’s not America’s. In fact, the Framers of the U.S. Constitution created separation of powers, checks and balances, and federalism precisely to avoid concentrated power. Their goal was to stop authoritarians like Donald Trump.