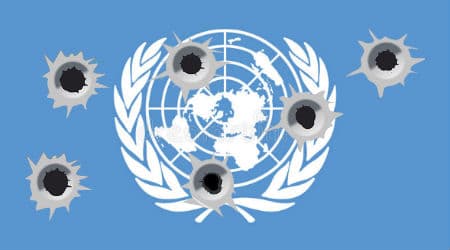 What was left, when the muted applause died down in the UN chamber, was a sense of incoherence and a capricious menace hanging in the air

Trump offered the world a black-and-white choice between the “righteous many” against the “wicked few” – but his choice of language was far blunter than his predecessor. There can not have been many, if any, threats to “totally destroy” another nation at a UN general assembly. He did not even direct the threat at the regime, making it clear it was North Korea as a country that was at peril.

Trump issued the warning just minutes after the UN secretary general, António Guterres, had appealed for calmer rhetoric. “Fiery talk can lead to fatal misunderstandings,” Guterres had said in his own first general assembly address, and it was clear who those remarks were directed towards. CONTINUE READING

The tenor throughout Trump’s forty-minute speech was contrary to many of the trends of the twenty-first century. He advocated ideas that other nations either find suspect or shun outright. Trump ignored the fact that he needs the world right now more than the world needs (or wants) him. Saying that the United States is gaining military muscle no longer means that Washington gains more leverage. Power has been redefined and defused, as have the threats of the era. CONTINUE READING

John Nichols, The Nation: Trump’s First Speech Before the UN Was an Absurd, Bombastic Disaster

Worse yet, Trump squandered an opportunity to calm fears about his instability by telling the chamber that the United States would, if provoked, obliterate a country of 25 million people.

“The United States has great strength and patience,” Trump said during his first address to the General Assembly. “But if it is forced to defend itself or its allies, we will have no choice but to totally destroy North Korea.”