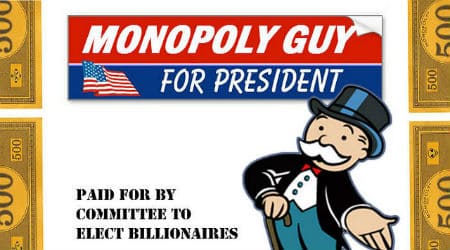 Trump will persist with the claim that he is working on a populist plan. In actuality, he is cooking up a fiscally irresponsible gift to plutocrats

In assessing the Administration’s approach, the question to ask is: Will these measures help alleviate the most pressing economic problems facing the country, such as sharply rising inequality and the stagnant growth in wages and productivity? The short answer is no. In all likelihood, wages and productivity would be largely unaffected by Trump’s tax cuts. And, since the giveaways would be concentrated on the very rich, measures of post-tax inequality would rise.

Robert Reich, Truthdig: Wall Street and Corporate America Don’t Seem to Have Learned a Thing From the Past Year

These views aren’t “centrist,” and they’re not sustainable. More tax breaks for the rich and more subsidies for big corporations aren’t much better for America than xenophobia.

According to press accounts, Donald Trump seems prepared to put out a tax cut proposal that could net him hundreds of millions of dollars over the next decade. It probably won’t do much to help the rest of us, but folks who were worried about whether President Trump would be able to pay off his debts should be relieved.