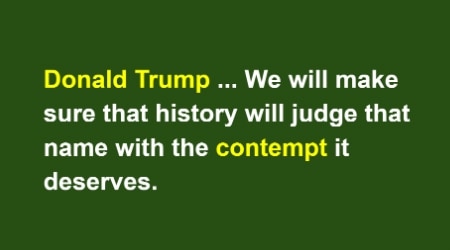 John Cassidy, The New Yorker: Donald Trump’s “Screw You” to the World

“At what point does America get demeaned?” Trump demanded, his voice rising. “At what point do they start laughing at us as a country?” The answer is that the laughing stopped a good while back. What once seemed like a punch line—Donald Trump in the White House—is now an everyday reality that the rest of the world is trying to deal with. After this latest display of nihilism, it only seems more alarming. CONTINUE READING

Mark Hertsgaard, The Nation: Donald Trump’s Withdrawal From the Paris Accords Is a Crime Against Humanity

“Crimes against humanity” is a phrase to use with caution, but it fits Trump’s repudiation of the Paris Accord and indeed his entire climate policy. Timothy Wirth, who as the under secretary of state in the Bill Clinton administration negotiated the Kyoto Protocol that sought to limit global warming, has said that those who deny the well-established science of climate change “ought to be tried for crimes against humanity.” Wirth told The Nation after Trump’s withdrawal from the Paris Accord that he stood by his remark, adding that the president’s action was “a stunning moral abdication of responsibility to future generations.” CONTINUE READING