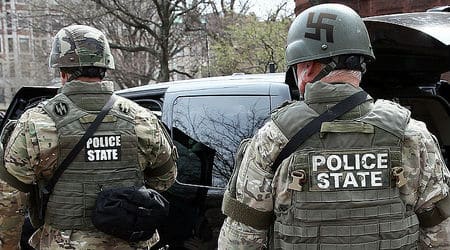 Facing up to 75 years in prison, 135 Inauguration Day protesters are refusing to collaborate with the prosecution.

Sarah Lazare, In These Times: The Police State Can Come After Trump Protesters, But It Can’t Make Them Cooperate

“We will not cooperate against any of our codefendants, nor accept any plea deals that cooperate with prosecutors at the expense of other codefendants,” reads a unity statement. The declaration has been signed by 135 defendants, according to Kris Hermes, one of many providing legal support.

The defendants pledge that they “will refuse to accept that any of the charges or actions of law enforcement were necessary or justified. … We will not say anything publicly or privately that has the possibility of harming individual defendants or defendants as a group.” CONTINUE READING

These aren’t the only times the state has tried to crack down on dissent; in each case the procedure has been to arrest a huge group of people based on their mere presence at a protest, and indict them with alarming charges as a way of coercing defendants into taking plea deals that might not accurately reflect the truth. This tactic benefits the state and prosecutors, since time and resources are not wasted on lengthy trials of defensible cases. CONTINUE READING

Anticipating a mid-July vote on the Senate GOP’s Trumpcare bill that would strip insurance from 22 million people, dismantle Medicaid, and potentially kill thousands per year, a coalition of some of the nation’s most prominent progressive groups plan to carry out sit-ins across the country on Thursday as part of an organized push to force vulnerable Republican senators to reject the legislation. CONTINUE READING