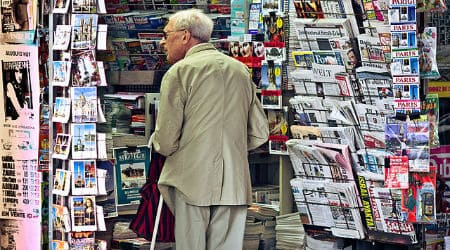 Meanwhile, on Fox News, a different story was playing out. “The media has been lying to you all day and all weekend long,” Sean Hannity said in his opening monologue. Pivoting hard enough to make an NBA center proud, Hannity quickly glossed over Manafort, Gates, and Papadopoulos to focus on the “real Russia scandal,” which—you’re not going to believe this—involves Hillary Clinton. Hannity was the most out of touch with reality, but his approach was echoed by fellow Fox News primetime hosts Tucker Carlson and Laura Ingraham.

While much has been said about the divergent media universes operating in America, the hard news surrounding Mueller’s investigation is impossible for even the most hard-line, pro-Trump outlets to ignore. Attempts to spin, or to rope Hillary Clinton into the narrative, will continue, but with more charges expected, the story isn’t going away. CONTINUE READING

The points made in the pieces in the Journal, owned by Rupert Murdoch, not only tracked with White House talking points but were similar to those being hawked on other Murdoch properties, including the New York Post and Fox News. On October 28, the Post also ran an op-ed calling for Mueller’s resignation, while Fox News personalities have beat a steady drum calling for attention to shift away from any investigation of Trump and toward Hillary Clinton and the Democrats.

Reaction to the Journal pieces on Twitter was mostly unkind:

One of the more notable divisions among the conservative ranks is seen in Commentary deriding a Wall Street Journal op-ed that had urged blanket pardons by Trump. “These contributions to the opinion landscape play a reckless game with remarkably high stakes,” Commentary contends, arguing that sabotaging Mueller could let some Democrats off the hook.

On Trump & Friends this morning, there did not appear to be a significant follow-up to the burger emoji flap. As for the indictments? Its leading story (“Great news!” said co-host Brian Kilmeade after an opening minute of Halloween chatter) was Navy SEALs capturing an alleged Benghazi militant involved in the 2012 attack there.

It was only then that it turned to the events yesterday, downplaying the charges against Manafort and Co., as well as those about “a fellow named George Papadapoulos.” Co-host Ainsley Earhardt chided Mueller’s team as “mostly Democrats.” CONTINUE READING