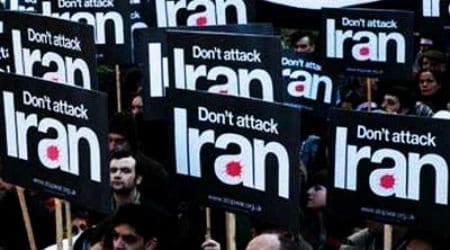 The threat of a major conflict with Iran is high. Rarely has a sinister plan to destroy an arms control agreement and pave the way for war been so openly telegraphed.

Trita Parsi, National Iranian American Council: The Mask Is Off: Trump Is Seeking War with Iran

Something extraordinary has happened in Washington. President Donald Trump has made it clear, in no uncertain terms and with no effort to disguise his duplicity, that he will claim that Tehran is cheating on the nuclear deal by October—the facts be damned. In short, the fix is in. Trump will refuse to accept that Iran is in compliance and thereby set the stage for a military confrontation. His advisors have even been kind enough to explain how they will go about this. Rarely has a sinister plan to destroy an arms control agreement and pave the way for war been so openly telegraphed. CONTINUE READING

So the threat of a major conflict with Iran is high — because the administration wants it that way. Most if not all of the administration’s key national security players, and their allies in Congress, see stepped-up U.S. military activity in the region as important to confronting Iran. Far from believing that the Iran deal contained the most serious U.S.-Iran flashpoint, they believe Iran, even without nuclear weapons, poses an existential threat to the U.S. and our allies. They believe that regime change — switching out Iran’s theocracy for a (hypothetical) secular democracy — is the only way, long-term, to deal with that threat. (Hands up if you recall hearing that one before about a country beginning with I.) CONTINUE READING

President Trump, frustrated that his national security aides have not given him any options on how the United States can leave the Iran nuclear deal, has instructed them to find a rationale for declaring that the country is violating the terms of the accord.

American officials have already told allies they should be prepared to join in reopening negotiations with Iran or expect that the United States may abandon the agreement, as it did the Paris climate accord. And according to several foreign officials, the United States has begun raising with international inspectors in Vienna the possibility of demanding access to military sites in Iran where there is reasonable suspicion of nuclear research or development.

If the Iranians balk, as seems likely, their refusal could enable Washington to declare Tehran in violation of the two-year-old deal. CONTINUE READING