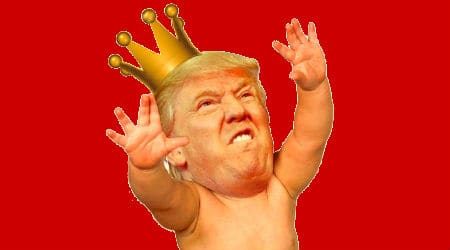 This – precisely this – was what alarmed us most about the prospect of Donald Trump becoming president: that he was sufficiently reckless, impulsive and stupid to bring the world to the brink of nuclear war.

Jonathan Freedland, The Guardian: Trump has taken us to the brink of nuclear war. Can he be stopped?

This was the moment many Americans, along with the rest of the world, feared. This – precisely this – was what alarmed us most about the prospect of Donald Trump becoming president of the United States. Not that he would hire useless people or that he would tweet all day or use high office to enrich himself and his family or that he’d be cruel, bigoted and divisive – though those were all concerns. No, the chief anxiety provoked by the notion of Trump in the White House was this: that he was sufficiently reckless, impulsive and stupid to bring the world to the brink of nuclear war. CONTINUE READING

Mehdi Hasan, The Intercept: The Madman With Nuclear Weapons is Donald Trump, Not Kim Jong-un

Does Trump understand the difference between escalating and de-escalating a nuclear crisis? Listen to Republican Senator John McCain, who has never met a “rogue nation” he did not want to bomb, invade or occupy. “I take exception to the president’s words,” McCain said on Tuesday, adding: “That kind of rhetoric, I’m not sure how it helps.”

I mean, just how crazy do you have to be to advocate a preemptive nuclear strike that even McCain cannot get behind? CONTINUE READING

On Monday, the President took time away from the lush fairways and greens at Trump National Golf Club, in Bedminster, New Jersey, to tweet insults at Senator Richard Blumenthal, the Connecticut Democrat, who had the temerity to suggest that Robert Mueller, the special counsel, should be allowed to continue and complete his investigation. On Tuesday afternoon, Trump again interrupted his break, this time to attend a briefing in the Bedminster clubhouse about the nation’s opioid crisis. He took the opportunity to threaten a devastating nuclear strike on North Korea. CONTINUE READING