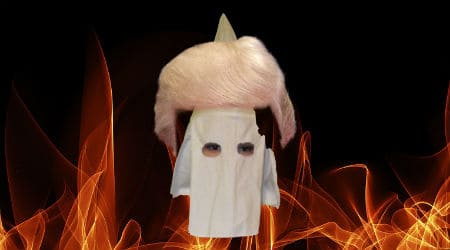 There you have it. This is Trump, a man whose deepest political impulses are tied to racial grievance and a desire for revenge, a desire to place the deserving and white back at the top of the racial hierarchy.

Josh Marshall, Talking Points Memo: The House Is On Fire – Accepting the Truth of the Trump Revolution

We have if not a growing white supremacist movement in the US at least an increasingly vocal and emboldened one. They both made Trump possible and have in turn been energized and emboldened by his success. He reacts this way because he is one of them. He is driven by the same view of the world, the same animus and grievances. What we’ve seen over the last five days is sickening and awful. The house is on fire. But it was on fire a week ago. It’s been on fire since November. The truth is indeed unimaginable and terrifying. But we need to accept the full truth of it if we are going to be able to save our country. CONTINUE READING

Republicans might sound shocked, but nothing since Saturday—not his “many sides” condemnation, not his silence in the face of criticism, not his grudging correction and then angry repudiation of that same correction—should shock them. This is who he is. And words of anger or disappointment are no longer enough. If Republicans don’t break ties with the president, they are allies to a man who defends white supremacists and condemns those who stand against them. CONTINUE READING

Zack Beauchamp, Vox: What Trump gets wrong about Confederate statues, in one chart

Trump’s equivalency between Confederate statues and one of George Washington misses the mark. Washington was a slave owner, yes, but the meaning of a Washington statue is not necessarily pro-slavery or pro-white supremacy — whereas that’s exactly the point of the vast majority of Confederate memorials in the United States. CONTINUE READING