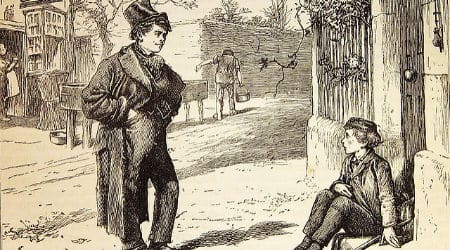 Even by the modern GOP’s illustrious standards, this a stunningly ruthless act of class war.

The Tax Cuts and Jobs Act doesn’t just redistribute trillions of dollars to corporate shareholders; or provide a windfall to wealthy business owners; or repeal the tax on estates worth more than $5.5 million dollars: It also allows the heirs of those estates to avoid paying any capital gains on their inherited assets — while ending a tax credit for adoption expenses, which was specifically designed to encourage adoption.

In other words, the law finances a giant gift to multimillionaire trust-fund kids, by (among other things) cutting subsidies that benefit orphans. Even by the modern GOP’s illustrious standards, this a stunningly ruthless act of class war. CONTINUE READING

The size of the math problem helps explain why the bill unveiled on Friday morning by Ryan, the House Speaker, and Kevin Brady, the chairman of the House Ways and Means Committee, was so long (three hundred and thirty-six pages), complicated, and filled with the kind of accounting that would have fit in at Enron. But, despite its complexity, the basic thrust of the bill is straightforward: the Donald Trumps of the world get caviar; the ordinary person gets peanuts; and future taxpayers, who will bear the burden of all the new debt issuance necessary to finance the package, get shafted. CONTINUE READING

For months Republicans and President Donald Trump have worked to convince Americans that massive tax cuts for the top one percent and the largest corporations would somehow primarily benefit the working class, but a new Washington Post/ABC News poll published Friday finds that the public isn’t buying the GOP’s “propaganda.”

Despite House Speaker Paul Ryan’s (R-Wis.) insistence on Thursday that his party’s proposals are geared toward helping “the middle class families in this country who deserve a break,” only 17 percent of Americans believe the GOP tax plan “mainly favors” the middle class, while 60 percent believe their plan would primarily benefit the wealthiest. CONTINUE READING