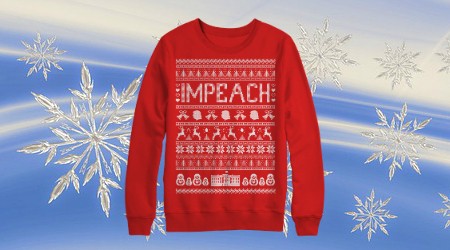 We have created a political culture in which firing our national executive is viewed as a crisis rather than as a difficult but occasionally necessary act. There are plenty of people who simply should not be president of a nuclear hyperpower, and Trump is one of them.

It is time to reassess. Impeachment, in Donald Trump’s case, would lead to the elevation of Mike Pence — a Republican who is better liked by his party and who, to Democrats’ chagrin, would likely be much more effective at pushing a conservative legislative agenda. But it would mean less danger of an accidental war with North Korea, less daily degradation of democratic norms and civil discourse, an executive who has the attention span to follow briefings and the temperament to stay off Twitter when he’s angry, and the precedent that there is some minimal level of job performance that the American people and their political representatives are willing to demand of their president. CONTINUE READING

March On, a new organization founded by leaders of the massive women’s protests the day after President Donald Trump’s inauguration, is taking to the airwaves with a holiday-themed push for his impeachment.

While the group’s message — including offering for sale red Christmas sweaters embroidered with the word “Impeach” — strikes a different tone from liberal activist Tom Steyer’s deadly serious $10 million ad campaign on removing Trump, the effort is another sign that the Democratic Party’s progressive base is getting ahead of its leaders on impeachment. CONTINUE READING