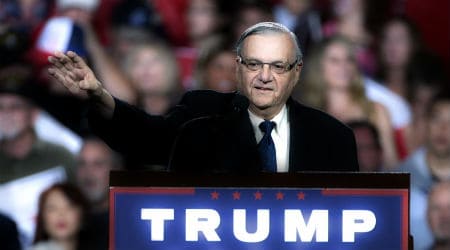 Trump has realized that he can use his pardon power to bypass the lawyers and judges and investigators he so despises. Arpaio was a test run. Now he will know it works.

Mark Joseph Stern, Slate: The Arpaio Pardon Is a Bad Sign for the Mueller Investigation

And here is the frightening thing: The Mueller investigation has been serving subpoenas through a grand jury, most recently for firms associated with former Trump campaign manager Paul Manafort. What would happen if subjects of Mueller’s subpoenas don’t comply? They would be held in contempt, just as Arpaio was. And we’ve seen how little respect Trump has for judges who hold his friends in contempt. CONTINUE READING

Let’s call things by their proper names here. Arpaio is, of course, a white supremacist. But he’s more than that. There’s a word for political regimes that round up members of minority groups and send them to concentration camps, while rejecting the rule of law: What Arpaio brought to Maricopa, and what the president of the United States has just endorsed, was fascism, American style. CONTINUE READING

“It’s a message to the country,” Carlos Garcia, the executive director of Puente, an Arizona-based human-rights organization, told me. “What Arpaio did—that’s coming to you, wherever you live.” CONTINUE READING