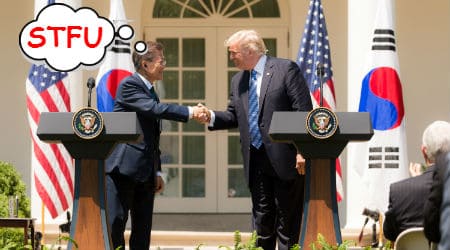 A rally on Monday in central Seoul featured a large banner reading: “Trump, shut up!”

With his public alarmed by President Trump’s recent threats to North Korea, President Moon Jae-in of South Korea issued an unusually blunt rebuke to the United States on Tuesday, warning that any unilateral military action against the North over its nuclear weapons program would be intolerable.

”The Americans had always been an ally who would prevent, not start, war on the Korean Peninsula,” said Kim Ji-woon, a college student attending a rally on Monday in central Seoul that featured a large banner reading: “Trump, shut up!” “With his trash war talk, Trump makes me wonder what’s the use of the alliance.” CONTINUE READING

The island faces a battery of live-fire military ammunition with no foreseeable end. But the immediate danger doesn’t come from North Korean missiles. It comes from the United States military, which freely uses the Pacific territory as its own private firing rage.

While tourist ads depict the South Pacific as a tranquil safe haven, that tranquility is pierced by the roars of B-52 bombers and submarine water-to-shore artillery blasts. For as long as the United States has maintained Guam as a colony, it has been a simulated warzone. CONTINUE READING

“Since friends have to tell them the truth, I’ve told Vice President Pence the possibility of military intervention shouldn’t even be considered,” Santos said.

“The Latin American continent, every country in Latin America, would not favor any form of military intervention and that is why we are saying we are intent on looking into other measures,” Santos said, “some of which are already underway and others to be implemented in the future. CONTINUE READING