He was inventing a problem that doesn’t exist, and using that imaginary problem to demonize brown people. 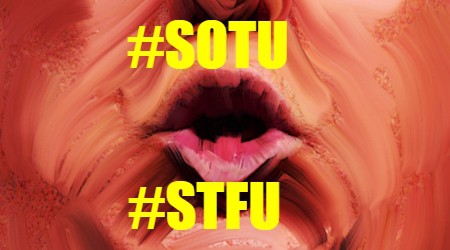 A lot of Trump’s speech — and an even greater share of the emotional energy, since he seemed bored reciting misleading economic numbers — was devoted to lamenting a wave of violent crime by immigrants. Was this racist? Yes, of course. But saying that doesn’t capture the full evil of what he was doing (and I use the term “evil” advisedly).

For he wasn’t exaggerating a problem, or placing the blame on the wrong people. He was inventing a problem that doesn’t exist, and using that imaginary problem to demonize brown people. CONTINUE READING

Not long into his speech, Trump uttered a chilling line: He called on Congress to give his White House the authority to summarily fire any federal employee deemed to “undermine the public trust, or fail the American people.” CONTINUE READING

[Related] Trumpocracy: Tracking the Creeping Authoritarianism of the 45th President

The real state of the American economy is pretty good, but not nearly as good as Donald Trump made it out to be in his State of the Union Address Tuesday night. Nor should he take as much credit as he does for a labor market that’s finally turned around after years of recovery.

But more troublesome than Trump’s braggadocio or anything he did say Tuesday night is what he didn’t offer — a remotely plausible solution for any of the major problems facing the country. CONTINUE READING