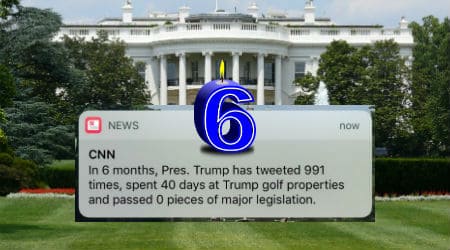 Trump has made 836 false or misleading claims since January. He has averaged 4.9 misstatements a day during his first six months in office.

1. He told you he’d repeal Obamacare and replace it with something “beautiful.” You bought it. But he didn’t repeal and he didn’t replace. (Just as well: His plan would have knocked at least 22 million off health insurance, including many of you.)

2. He told you he’d cut your taxes. You bought it. But tax “reform” is stalled. And if it ever moves, the only ones whose taxes will be cut are the wealthy.

3. He told you he’d invest $1 billion in our nation’ crumbling infrastructure. You bought it. But his infrastructure plan, which was really a giveaway to rich investors, is also stalled. CONTINUE READING

Shortly before reaching the six-month mark of his presidency, President Trump made an assertion and then paused that perhaps he should not be so definitive. “I better say ‘think,’ otherwise they’ll give you a Pinocchio. And I don’t like those — I don’t like Pinocchios.”

As president, Trump has already earned 20 Four-Pinocchio ratings — and a total of 152 Pinocchios. If he doesn’t like his Pinocchios, there’s a relatively simple solution: Stick to the facts. CONTINUE READING

Citing issues ranging from inaccurate reports about crowd sizes at inauguration to the gender pay gap at the White House to the way the President has handled the investigation into Russian interference in the election, Democratic lawmakers have filed a “no-confidence” resolution against President Donald Trump that lists 88 reasons why he’s unfit to serve as President. CONTINUE READING