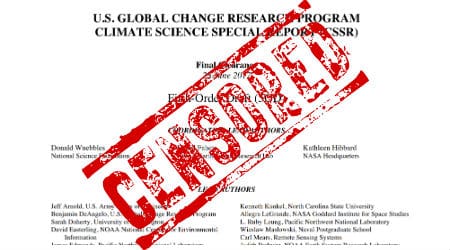 This is the first case in which an analysis of climate change of this scope has come up in the Trump administration, and scientists will be watching very carefully to see how they handle it.

One government scientist who worked on the report, Katharine Hayhoe, a professor of political science at Texas Tech University, called the conclusions among “the most comprehensive climate science reports” to be published. Another scientist involved in the process, who spoke to The New York Times on the condition of anonymity, said he and others were concerned that it would be suppressed. CONTINUE READING

In a bold new strategy unveiled on Monday in the Guardian, the US Department of Agriculture – guardians of the planet’s richest farmlands – has decided to combat the threat of global warming by forbidding the use of the words.

Congress could short-circuit that litigation strategy with measures like the provision passed by the House last week allowing withdrawal of Obama’s “Waters of the U.S.” rule without public notice, comment or any of the other requirements that apply to federal departments and agencies. The Trump administration already has begun rescinding the rule, which was written to protect wetlands from dredge and fill material and created new permitting and reporting requirements that the oil, gas and coal industry abhor. The rider that the GOP tucked into an $800 billion budget bill would hurry the repeal and reduce possibilities for legal challenge. CONTINUE READING