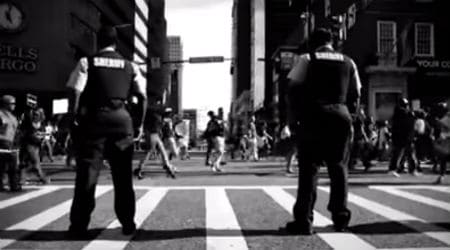 Ponder this flagrant call for violence, this insidious advocacy of hate delivered with a sneer, this threat of civil war, this despicable use of propaganda…

Take a look at the ad below and ask whether the National Rifle Association can go any lower. Ponder this flagrant call for violence, this insidious advocacy of hate delivered with a sneer, this threat of civil war, this despicable use of propaganda to arouse rebellion against the rule of law and the ideals of democracy.

On the surface this is a recruitment video for the National Rifle Association. But what you are really about to see is a call for white supremacy and armed insurrection, each word and image deliberately chosen to stir the feral instincts of troubled souls who lash out in anger and fear:

George Zornick, The Nation: Gun Sales Are Plummeting and Trump Wants to Help

The NRA’s top priority now is to get Congress to pass—and President Trump to sign—concealed-carry reciprocity legislation, which would require every state to recognize a concealed-carry permit issued by any other state. In other words, California—a state with a strict permitting process, in which a person must demonstrate the need for a concealed weapon—would have to allow anyone with a permit from, say, South Dakota to carry a weapon around. (In South Dakota, you can get a concealed-carry permit with a half-page application and a $10 fee; there’s no training required, and you’re not even fingerprinted.) Under the proposed legislation, if you live in one of the 11 states that don’t even require a permit, you’d be able to carry a concealed weapon anywhere you travel. CONTINUE READING

Many California firearm owners were given a reprieve Thursday from making a tough decision after a federal judge temporarily blocked a key provision of the state’s gun control laws approved last year in the wake of the San Bernardino terrorist attack.

At the request of attorneys for the National Rifle Assn., U.S. District Judge Roger T. Benitez issued a preliminary injunction blocking a law that requires Californians to dispose of large-capacity ammunition magazines by Saturday or face fines and possible jail time. CONTINUE READING