Intel Report: May Day to have immigrant tilt as workers plan to protest against Trump 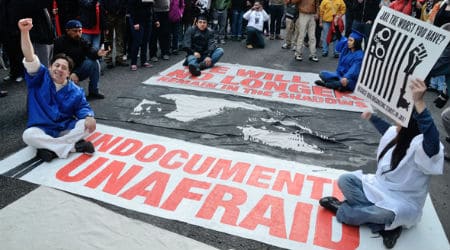 The immigrants-rights movement, organized by some of the most vulnerable people in our society, is hitting the streets in force on May 1.

Join the May Day March in Mountain View!

Amanda Holpuch, The Guardian: May Day to have immigrant tilt as workers plan to protest against Trump

“You’ll see rallies, you’ll see marches, you’ll see strikes, you’ll see any number of events that at the end of the day are doing two things: either calling out Trump on his bigotry but also affirming the rights and the dignity of immigrants and refugees in this country,” said Kica Matos, director of immigrant rights and racial justice at the Center for Community Change (CCC).

The Trump administration’s approach to immigration enforcement has leaned heavily on a combination of bellicose language and hard-line directives effective at driving intense fear into immigrant communities. Beyond that, advocates and former U.S. immigration officials say, the White House agenda is basically a rehashing of some of the most counterproductive policies of the Obama administration, married to a series of mind-boggling and at times hypocritical proposals that threaten to plunge the already broken immigration system into further disarray, all while undermining public safety in the very areas it seeks to improve.

May Day is historically a day of resistance. If the past is any predictor, millions around the United States will march in defense of immigrant rights, and against the increasingly draconian, anti-immigrant, anti-refugee policies of President Donald Trump. On May Day, immigrants, their families and their allies organize, march and resist.

* Amy Goodman will be speaking in Palo Alto on May 15, at a benefit for Democracy Now! and Peninsula Peace and Justice Center