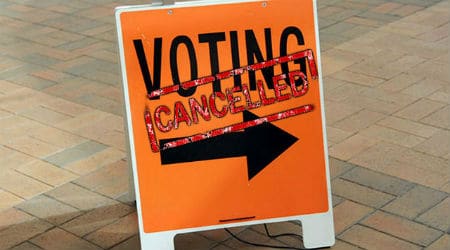 As the commission meets Tuesday to discuss potential changes to the way Americans vote, its members have been busy promoting falsehoods that they’ll use to restrict access to the ballot

As the commission meets Tuesday for the second time to discuss potential changes to the way Americans vote, its members have been busy promoting falsehoods, exacerbating concerns that they’ll use any pretense to restrict access to the ballot under the guise of eliminating voter fraud. The witness list for the meeting—100 percent white men—includes people who have floated radical ideas like requiring background checks for voting. CONTINUE READING

It’s worth noting that Kobach is basically recycling the same misleading claim he made after the election, when he suggested there was widespread voter fraud in New Hampshire because of the mere fact that people registering on election day used out of state licenses. But this is completely legal, and commonplace, especially for college students, who probably comprised the majority of these voters. A typical example would be someone who lived in Massachusetts and got a driver’s license at 16, moved to New Hampshire for college at 18, and registered to vote in New Hampshire. CONTINUE READING

Brennan Center for Justice: Everything You Need to Know About the Commission

A comprehensive collection of articles about the controversial commission. VISIT THE GUIDE