“You know what?” Corbyn said. “Politics has changed, and politics isn’t going back into the box where it was before.” 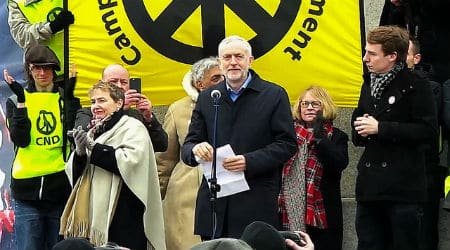 “You know what?” Corbyn said. “Politics has changed, and politics isn’t going back into the box where it was before.”

“Because what’s happened is people have said they have had quite enough of austerity politics,” he went on. “They have had quite enough of cuts in public expenditure, underfunding our health service, underfunding our schools and our education service, and not giving our young people the chance they deserve in our society. . . . And I’m very proud of the results that are coming in all over the country tonight, of people voting for hope, voting for hope for the future and turning their backs on austerity.” CONTINUE READING

Labour’s crucial insight was that the Brexit vote had less to do with Europe than with the state Britain’s in: jobs and dignity lost, communities unraveling, education failing, the National Health Service in tatters, nurses depending on food banks, and homelessness on the rise while the wealthy continue to flourish, oblivious and cut off. Cameron’s EU referendum asked Britain the wrong question; Corbyn’s Labour Party offered a different set of answers: an end to austerity, a commitment to the public good, the faith that generosity is more powerful than greed. We had almost come to believe that those things were impossible, written off by history. CONTINUE READING

You have to wonder about a Trump factor. Theresa May was famously buddy-buddy with Trump, who is deeply unpopular in the UK. When the American president attacked (under false pretenses) the Labour mayor of London, Sadiq Khan, May took a long time to reply, and then tepidly. CONTINUE READING