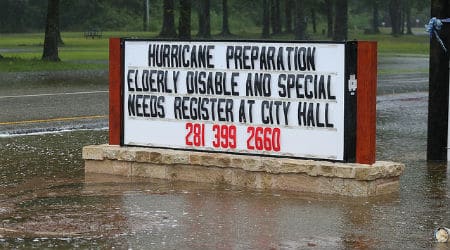 Decades of neglect, inequality, and disenfranchisement mean that all Houstonians, but especially the poorest and most vulnerable, have been left utterly undefended.

welve years ago today, a storm called Katrina made landfall on the Louisiana coast, and exposed for all time a simple and brutal truth: Our unfolding climate catastrophe, clearly visible even then, is rooted in social and economic inequalities that render most vulnerable the most marginalized and powerless. It showed us that the storms of this century, in both causes and deadly effects, are inescapably political—as much about our democracy as about the changes wrought upon our atmosphere. (Note to those in the media: It’s not “politicizing” a tragedy to point out that the causes of the tragedy, and responses to it, are deeply political.) CONTINUE READING

Tim Murphy, Mother Jones: Want to Rebuild After a Hurricane? Here’s What Not to Do

Hurricane Ike, which swept across southeast Texas in 2008, caused $29 billion of devastation in the Houston area, and its high winds and rain damaged 150,000 homes. In the aftermath, the city distributed thousands of blue tarps to homeowners with damaged roofs. They were intended to be a temporary fix before the owners secured funds for the proper repairs. But years passed and the roofs still weren’t fixed, in part because almost all of the initial $87.2 million pot of federal Ike recovery funding had been spent elsewhere.

The first round of $87.2 million in Ike reconstruction funds had flowed into Houston after the storm and went out fast, mostly to apartment owners, a testament to their political muscle and agile lobbyists. CONTINUE READING

The proposed cuts would include programs run by the Federal Emergency Management Agency, whose new administrator was praised by Trump in a tweet last weekend for “doing a great job”; the Department of Housing and Urban Development, which helps rebuild homes, parks, hospitals and community centers; the National Weather Service, which forecasts extreme storms; and the National Oceanic and Atmospheric Administration, whose research and community engagement help coastal residents prepare for disaster.

“The president has definitely sent a signal with his budget that emergency management is not of interest,” said Scott Knowles, a historian at Drexel University who studies risk and disaster. CONTINUE READING