Intel Report: Here’s What Republicans Are Voting For on Thursday – A Moral Abomination 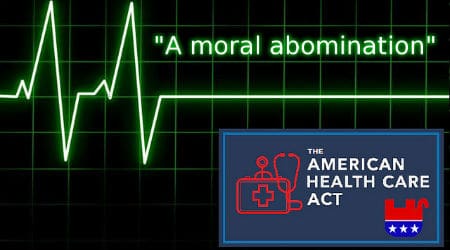 How is it possible that 90 percent of House Republicans are happily voting in favor of this moral abomination?

Kevin Drum, Mother Jones: Here’s What Republicans Are Voting For on Thursday

This is a depraved piece of legislation. It’s a windfall for the rich and promises nothing but misery for the poor. How is it possible that 90 percent of House Republicans are happily voting in favor of this moral abomination? Read the article

Tom Toles, Washington Post: The Republican health-care plan makes no sense at all, except the perfect kind

Yes, for the slow learners in the class, it’s about huge tax cuts for the rich, again. It is always about huge tax cuts for the rich. All that the GOP needs to do is the ritual hand-waving about how it’s really about health care, or that dying uncovered and broke is really what freedom is all about, or whatever. It no longer matters. The rich are running the GOP before, during and after the Trump “populist” revolt, and they are fully prepared to run it right into the ground, and you right into an early grave — if that’s what it takes to get their blessed tax cuts. Read the article

Jeffrey Young, Huffington Post: Republicans Are Rushing To Pass Their Health Care Bill Before You Find Out What’s In It

This is not how lawmakers legislate when they’re advancing a good policy. This is how they legislate when they’re afraid that the voters they represent will figure out the game and refuse to go along. That’s what happened in late March, the last time President Donald Trump and House Speaker Paul Ryan (R-Wis.) tried to force their American Health Care Act through the lower chamber.  Read the article

Here’s the thing, though: Trump and Republicans would have a lot more leverage if their bill weren’t so darned unpopular. I estimate that there are only about 80 congressional districts — out of 435 — where support for the bill exceeds opposition. About two-thirds of Republican members of the House, in fact, likely come from districts where the plurality of voters oppose the bill. Read the article

It really is this simple:
Under the AHCA these are pre-existing conditions. Do you & your family still qualify for healthcare? #KillTheBill pic.twitter.com/KtWWf2R1OC