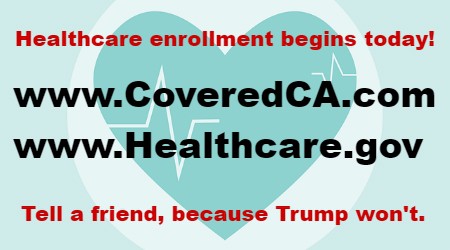 Obama even took his sales pitch to late-night TV to make sure people knew it was time to sign up for an ACA insurance plan. Trump released a campaign-style video attacking the law.

Open enrollment for 2018 kicked off Wednesday morning. It’s the only time of year (save a few exceptions) that individuals and families can buy insurance on the Affordable Care Act’s exchanges, and it lasts six weeks. Back when Barack Obama was president, the government made a big annual push in the lead-up to open enrollment: The president took his sales pitch to late-night TV and even starred in absurdist viral videos to make sure people knew it was time to sign up for the next year’s insurance plan.

But the Trump administration is taking a different approach. On Tuesday, Trump released a campaign-style video attacking the law. CONTINUE READING

Today’s the day! You can go to https://t.co/p8DQwo89C7 and sign up for health coverage. Need a pep talk first? @BarackObama has you covered. pic.twitter.com/78DAFgUV77

It seems that President Trump himself doesn’t know anything about these points, or care. On Sunday morning, he issued a tweet crowing “as usual, the ObamaCare premiums will be up (the Dems own it).” He promised to “repeal & replace” the Affordable Care Act “soon after Tax Cuts!”

The danger created by Trump administration policy is that it feeds confusion among the ACA’s beneficiaries, in part because the administration has cut information and outreach services to the bone. CONTINUE READING