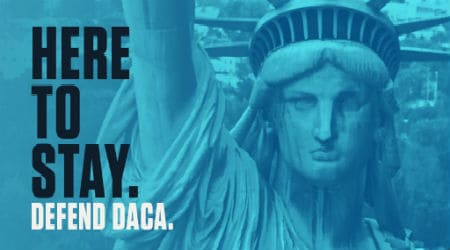 Trump’s decision to kill DACA is, first and foremost, a moral obscenity: throwing out 800,000 young people who are Americans in every way that matters, who have done nothing wrong, basically for racial reasons.

Regardless of what happens, Dreamers have already paid a price. For months, they have feared whether Trump will appease his base or keep his promise to treat Dreamers “with heart.” After Politico reported on Sunday that Trump would end DACA, Juan Escalante, a Dreamer and advocate, wrote on Twitter that thinking about losing DACA status “is not just traumatizing, it’s dehumanizing and exhausting.” CONTINUE READING

Trump’s decision to kill DACA — never mind the attempt to obscure things with that meaningless delay — is, first and foremost, a moral obscenity: throwing out 800,000 young people who are Americans in every way that matters, who have done nothing wrong, basically for racial reasons. But it’s also worth noting that Jeff Sessions just tried to sell it with junk economics, claiming that the Dreamers are taking American jobs. No, they aren’t, even if we leave aside the question of who’s an American. DACA is very much a boon to the rest of the U.S. population, and killing it will make everyone worse off. CONTINUE READING

Dara Lind, Vox: Why ending DACA is so unprecedented

The Trump administration’s announcement Tuesday, that it will end the Deferred Action for Childhood Arrivals (DACA) program — removing deportation protection and work permits from nearly 800,000 young unauthorized immigrants — unless Congress passes a bill in the next six months to protect DACA recipients, isn’t a punt or a reprieve. It’s an opportunity to deflect, or share, the responsibility for what would be an unprecedented act in US history. CONTINUE READING