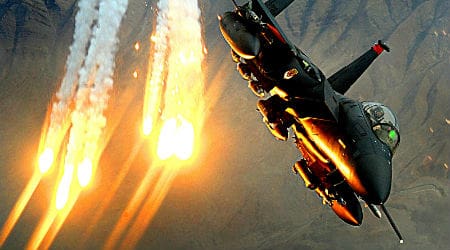 Conor Friedersdorf, The Atlantic: Donald Trump No Longer Wants to ‘Stay Out’ of Syria

There’s a word for what happens when a foreign power takes and holds territory without the consent of the sovereign state — ‘invasion.’ In many ways, current American policy is a lighter-footprint, less ambitious version of the invasion of Iraq in 2003. We’re using local allies, but our own boots are on the ground, and we’re directly defending our forces and our allies from threats from Syria’s own government. The key warring parties increasingly face a stark choice—agree to a de facto partition of the country or inch toward a great-power conflict. CONTINUE READING

Robert Fisk, The Independent: The US seems keener to strike at Syria’s Assad than it does to destroy Isis

But what is America doing attacking first Assad’s air base near Homs, then the regime’s allies near Al-Tanf and now one of Assad’s fighter jets? It seems that Washington is now keener to strike at Assad – and his Iranian supporters inside Syria – than it is to destroy Isis. That would be following Saudi Arabia’s policy, and maybe that’s what the Trump regime wants to do. CONTINUE READING

Australia has suspended all air operations over Syria in the wake of US forces downing a Syrian jet and a warning from Russia that US-led coalition planes are now targets for its forces in parts of the country.

The news from Australia, one of the coalition partners fighting ISIS in Syria, was described as a blow for the US, putting it in a “very difficult position” at a critical time as the battle to liberate the ISIS stronghold of Raqqa continues. CONTINUE READING