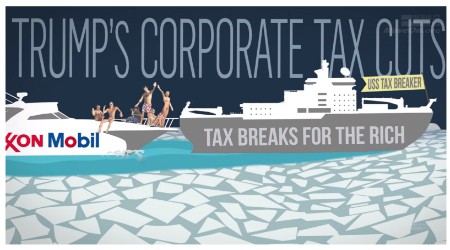 Trump, the pied piper of the plutocracy, would lead us into another round of privileged pillage. He won’t change; he must be stopped.

Though congressional Republicans and the White House rarely see eye-to-eye these days, they are united on the idea that cutting corporate taxes will spur an hiring boom that will reach down to the ordinary worker.

A new report from the Institute for Policy Studies shows this isn’t true. US companies are already paying minimal amounts in corporate taxes, and the ones most likely under Republican theory to pour tax savings into job creation have instead been more likely to cut their workforce over the past nine years. The data shows that low corporate tax rates more often lead to increases in CEO pay and boosts for shareholders. CONTINUE READING

Peddling a plan that doesn’t yet exist on paper. Promising jobs and raises while pushing tax cuts for the rich and corporations. Puffing an “American Model” that rewards global corporations for their tax dodges. Trump, the pied piper of the plutocracy, would lead us into another round of privileged pillage. He won’t change; he must be stopped. CONTINUE READING

Fans of economic policy are used to the old “night is day,” “down is up,” approach to economic policy. After all, much of the media are worried about robots taking all the jobs even as the data from the Bureau of Labor Statistics show that productivity growth (the rate at which robots are taking jobs) is at a record slow pace.

That’s why it is hardly surprising to hear the argument being taken seriously that reducing corporate taxes will lead to more investment and thereby greater wage growth in the future. The data from the last seventy years show there is no relationship between aggregate profits and investment. CONTINUE READING