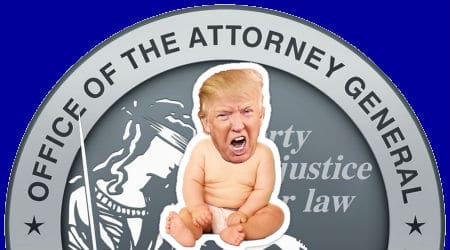 As California’s top attorney, Xavier Becerra has become the most prominent lawyer blocking the Trump administration’s rollback of environmental rules. Things have been going surprisingly well.

California has taken point in several key cases and joined dozens of others. The state already had more lawyers in the attorney general’s office than any other. Then a few months after Becerra took the job in January of this year — succeeding Kamala Harris, who has also taken up the fight against Trump as California’s newest U.S. senator — the legislature handed him an extra $6.5 million for the judicial campaign against Trump — enough to hire 19 more attorneys and 12 other staffers. CONTINUE READING

Nina Shapiro, The Seattle Times: ‘I’m not going to put up with it’: Washington AG Ferguson says lawsuit over DACA will show Trump’s bias

Charging President Donald Trump with violating promises and discriminating against young Mexican immigrants, Washington Attorney General Bob Ferguson announced Wednesday that 15 states and the District of Columbia are suing the Trump administration over its decision to end the Deferred Action for Childhood Arrivals (DACA) program.

“It’s outrageous. It is. It’s outrageous. I’m not going to put up with it,” Ferguson said at a morning news conference in Seattle, where he was joined by Gov. Jay Inslee and a half-dozen DACA recipients. The attorney general called this a “dark time for our country.” CONTINUE READING

Jim Zarroli, NPR: How States Are Banding Together To Take On Trump

As the investigation into Russian interference in last year’s election heats up, the states could once again play a powerful adversarial role, especially if the White House takes steps to thwart the probe.

If federal officials decide not to pursue charges — or are blocked from doing so — states conceivably could step in to fill the breach by filing charges of their own. Importantly, while the president can pardon people accused of federal crimes, he has no such power at the state level. CONTINUE READING