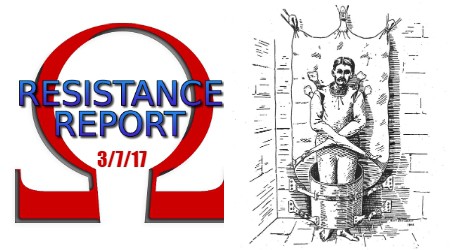 Quite a day for the Trump Regime yesterday. First they rolled out their latest version of Unconstitutional 2.0, then the Capitol Hall denizens rolled out their plans to Make America Sick Again. And finally, Ben Carson, addressing his staff at Housing and Urban Development for the first time said, “You can’t overload the human brain” and then promptly proved himself wrong.

Paul Krugman, The Conscience of a Liberal Blog: A Plan Set Up to Fail

Conservatives call their plan Obamacare 2.0. But a better designation would be Obamacare 0.5 because it’s really about replacing relatively solid pillars with half-measures, severely and probably fatally weakening the whole structure.

Isaiah J. Poole, OurFuture.org: Trumpcare Is Wrong For You. It’s A Toxic Prescription For Health Care

The extreme nature of what the House Republicans have proposed has yet to hit home. The fact that House leaders plan to plow forward with a markup of this bill without the typical Congressional Budget Office analysis of its costs and impact tips their hand: They know they cannot afford to tell the truth.

In the years before the Affordable Care Act (ACA) the uninsured population peaked at just over 50 million people. It fell sharply when the main provisions of the ACA took effect. The Republicans expect to raise the number of uninsured back above 50 million. Serious analysis of their plan shows that they have a good shot at meeting this goal.

Cody Wofsy, ACLU: Why the Only Way to Fix the Muslim Ban Is Not to Have a Muslim Ban

The fundamental truth of this new order, like the old one, remains unchanged: The president promised to ban Muslims from the United States, and the ban is his attempt to make good on that unconstitutional and indefensible goal.

Aryeh Neier, The Guardian: Who does Trump think he’s helping with the travel ban? It sure isn’t Americans

Whether or not the courts strike down this version of the travel ban, no good will come of it. Some nationalists who voted for Trump because of his pledge to exclude Muslims will be satisfied with it. But it will deepen antagonism to the United States by many of the world’s one-and-a-half billion Muslims.
… AND BEN CARSON

Speaking for the first time in front of HUD employees, Carson called enslaved African people — that is, humans who were forcibly taken from their homelands, shipped across the Atlantic Ocean in inhumane conditions, and then purchased and sold as property — as an example of America being “a land of dreams and opportunity.”