Bring your signs with your message! Some sign-making material provided

The corner of El Camino and Embarcadero has long been a traditiional protest spot in the Mid-Peninsula.
This photo is from a “No Iraq Surge” protest in 2004. Photo: P H Yang 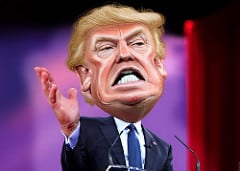 On January 20, the man who ran for president on a campaign built on hate, racism and misogyny … The person who lost the popular vote by 3 million votes … The man who is a charter member of the plutocrat class and who comes into office as a walking conflict of interest … The man who is a climate change denier and wants to make more money extracting dirty fossil fuels, rather than putting people to work making clean energy … That man will be inaugurated as President of the United States.