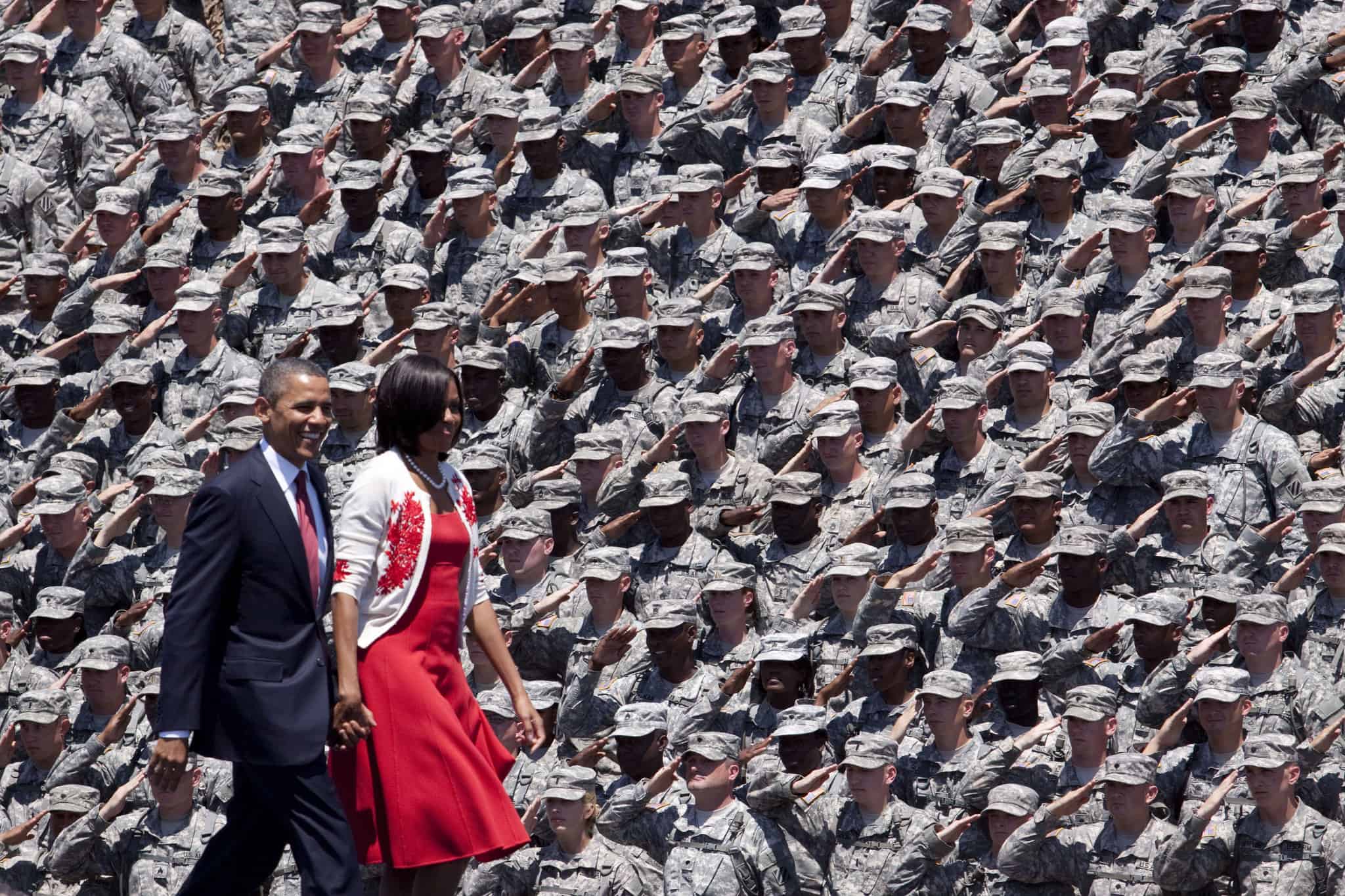 Saluting the Commander in Chief. (Photo: US Army @ flickr/cc)

Maybe it’s the phrase — “commander in chief” — that best captures the transcendent absurdity and unaddressed horrors of the 2016 election season and the business as usual that will follow.

I don’t want to elect anyone commander in chief: not the xenophobic misogynist and egomaniac, not the Henry Kissinger acolyte and Libya hawk. The big hole in this democracy is not the candidates; it’s the bedrock, founding belief that the rest of the world is our potential enemy, that war with someone is always inevitable and only a strong military will keep us safe.

In a million ways, we’ve outgrown this concept, or been pushed beyond it by awareness of global human connectedness and the shared planetary risk of eco-collapse. So whenever I hear someone in the media bring “commander in chief” into the discussion — always superficially and without question — what I hear is boys playing war. Yes, we wage war in a real way as well, but when the public is invited to participate in the process by selecting its next commander in chief, this is pretend war at its most surreal: all glory and greatness and hammering ISIS in Mosul.

“What about our safety here?” Brian Williams asked Gen. Barry McCaffrey on MSNBC the other night, as they were discussing the awfulness of terrorism and the need to bomb the bad guys out of existence. I cringed. How long can they keep selling this?

Our safety is far, far more imperiled by the fact that we have a military at all than by any enemy that military is allegedly fighting, but is, in fact, creating as it churns out endless collateral damage, a.k.a., dead and injured civilians.

The essential truth about war is this: The enemies are always on the same side. Regardless who “wins,” what matters is that war itself continues. Just ask the military-industrialists.

The only commander in chief I want to vote for is the one who will turn that title over to the historians and cry out that war is an obsolete and monstrous game, revered and coddled for five millennia now as the most sacred of activities that a (male) human can engage in. We need a commander in chief capable of leading us beyond the age of empire and the horrific games of conquest that are killing this planet.

“What about our safety here?”

When Brian Williams threw this question out to the American public, I thought, among much else, about the devastation and contamination the U.S. military has wrought on our deserts and coastal waters over the last seven decades by testing weapons — both nuclear and conventional — and playing, good God, war games; and then, sooner or later, by disposing of its obsolete toxins, usually with zero concern for the environmental safety of the surrounding area, whether it be in Iraq or Louisiana. Because the military is what it is, neither EPA regulations nor sanity itself usually applies.

For instance, as Dahr Jamail wrote recently at Truthout: “For decades, the U.S. Navy, by its own admission, has been conducting war game exercises in U.S. waters using bombs, missiles, sonobuoys (sonar buoys), high explosives, bullets and other materials that contain toxic chemicals — including lead and mercury — that are harmful to both humans and wildlife.”

Why do we need to worry about ISIS when, as Jamail reports, “the batteries from dead sonobuoys will leach lithium into the water for 55 years”?

And then there’s depleted uranium, the extraordinarily toxic heavy metal the U.S. military loves; DU missiles and shells rip through steel like it was butter. They also spread radioactive contamination across Planet Earth. And they help poison the waters off the Washington-Oregon coast, where the Navy plays its games, just like they poisoned the waters surrounding Vieques, a tropical paradise island off the coast of Puerto Rico, which, as I wrote several years ago, “was commandeered by the U.S. military as a throwaway site for weapons testing” for 62 years. The Navy finally left, but left behind contaminated soil and water and many thousands of live shells that had failed to detonate, along with a legacy of serious health problems for the island’s 10,000 residents.

“They are indeed the largest polluters on Earth,” environmental toxicologist Mozhgan Savabieasfahani told Truthout, speaking of the U.S. military, “as they produce more toxic chemicals than the top three U.S. chemical manufacturers combined. Historically, large global ecosystems and significant human food sources have been contaminated by the U.S. military.”

What does it mean to vote for the next commander in chief of the largest polluter on the planet?

I confess that I do not know — at least not in the context of this absurd and superficially debated election, with virtually every serious question or issue pushed to the margins. How do we transcend nationalism and the game of war — the reality of endless war — and engage in securing the safety of the whole planet? How do we acknowledge that this planet is not just “a jumble of insensate stuff, a random melee of subatomic particles” for us to exploit, as Charles Eisestein writes, but a living entity of which we are, crucially, a part? How do we learn to love this planet and one another?

Any potential “commander in chief” who asks lesser questions than these is engaging in a childish game with real guns.