“I don’t want to live in a society that does these sort of things.”

Get used to hearing the name of the twenty-nine-year-old systems administrator for the private defense company Booz Allen Hamilton who came forward Sunday as the source behind an explosive series of news stories detailing some of the US government’s most far-reaching surveillance programs run by its National Security Agency.

In a video interview conducted by Guardian journalist Glenn Greenwald and released by the British newspaper on Sunday, Snowden confesses to his role as a NSA whistleblower and explains why he decided to risk his livelihood—and possibly his freedom and his life—to reveal to the American public the extent of the programs he once administered.

“I don’t want to live in a society that does these sort of things,” Snowden explained to Greenwald and his colleague Ewan MacAskill in an extensive question and answer session. “I do not want to live in a world where everything I do and say is recorded. That is not something I am willing to support or live under.”

As the Guardian team reported:

Snowden has been working at the National Security Agency for the last four years as an employee of various outside contractors, including Booz Allen and Dell.

The Guardian, after several days of interviews, is revealing his identity at his request. From the moment he decided to disclose numerous top-secret documents to the public, he was determined not to opt for the protection of anonymity. “I have no intention of hiding who I am because I know I have done nothing wrong,” he said.

The Washington Post, at his request, also revealedSnowden’s identity on Sunday and reported that his motivations stemmed from a desire to expose the growing ‘surveillance state’ in the US. Along with theGuardian, the Post published an explosive report about the existence of a program called PRISM on Thursday, which was based on documents provided by Snowden and showed that the spy agency has the ability to access the online data from the world’s largest private internet systems.

“As I advanced and learned the dangerous truth behind the U.S. policies that seek to develop secret, irresistible powers and concentrate them in the hands of an unaccountable few, human weakness haunted me,” Snowden wrote in a note that accompanied the first documents he leaked to the Post. “As I worked in secret to resist them, selfish fear questioned if the stone thrown by a single man could justify the loss of everything he loves.”

Snowden said he admires other accused leakers of government secrets, such as Pfc. Bradley E. Manning — who is accused of leaking classified documents to the anti-secrecy group WikiLeaks — but considers himself different.

“I carefully evaluated every single document I disclosed to ensure that each was legitimately in the public interest” he told the Guardian. “There are all sorts of documents that would have made a big impact that I didn’t turn over, because harming people isn’t my goal. Transparency is.”

There will be much written about Snowden’s confession and his decision in the coming days, but for the moment—and given his ability to do it well—perhaps it’s most important to let him speak for himself. 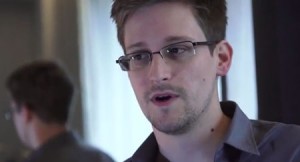