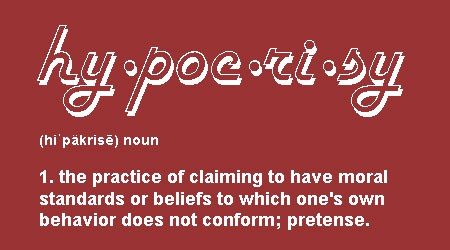 The hypocrisy is spread evenly among corporations, Congress, and free-market apologists, all of whom insult and imperil average Americans with their double standards. Here are some of the worst:

1. Poor People Just Need to Get a Job. But there are No Jobs.

This may be the greatest hypocrisy of them all, because it directly impacts so many Americans. When anti-food-stamp Congressman Stephen Fincher (R-TN) said, “The one who is unwilling to work shall not eat,”John Boehner had the answer: “Our job here is not to divide the American people…It’s to help every American have a fair shot at the American dream.”

But they don’t provide that fair shot. In October, 2011 Senate Republicans killed a proposed $447 billion jobs bill that would have added about two million jobs to the economy. Members of Congress filibustered Nancy Pelosi’s “Prevention of Outsourcing Act,” even as two million jobs were being outsourced, and they temporarily blocked the “Small Business Jobs Act.” In April, 2013 only one member of Congress bothered to show up for a hearing onunemployment.

Congress is not the only hypocrite here. In a recent poll that asked if “the government in Washington should see to it that everyone who wants to work can find a job,” 68% of the general public agreed, while only 19% of the wealthy were in agreement.

2. Government is the Problem. Unless the Rich Need a Subsidy.

That “government is the problem” sentiment goes back to Ronald Reagan, whose post-recession spending actually increased four times faster than Obama’s.

Food stamps have been cut to reduce government spending. But the Forbes 400, whose 13 richest members made more from their stocks in one year than the entire food stamp budget, includes 50 billionaires who receive farm subsidies. Walmart, which depends on public food stamp subsidies to keep its employees fed, has been forced to announce weaker revenuesbecause so many of its customers have been impacted by the food stamp cutbacks.

Most libertarians oppose government intervention of any type, unless it’s for national defense, homeland security, surveillance, disaster relief, prison funding, the drug war, any subsidies to oil and coal and agricultural companies, bailouts and Quantitative Easing, tax subsidies that mainly benefit the rich, and anything to do with women’s bodies.

3. “The Free Market System Distributes the Fruits of Economic Progress Among All People”

Milton Friedman said that in 1990. More recently John Boehner remarked, “President Kennedy in 1960 said, ‘a rising tide lifts all boats,’ and I think that is in fact correct.”

The business-aligned media seems to agree that we’re all together in a yacht. “The industry is back,” an analyst told the Wall Street Journal. Banks “should break all records” for earnings in 2014. A financial economist gushed, “The economy was firing on almost all cylinders as 2013 came to a close. For today, the sun is out and shining.”

It’s shining on the 10 percent who own almost 90% of the stocks beyond rapidly-disappearing pension holdings. In the 24 years since Milton Friedman’s outrageous statement, U.S. wealth inequality has become worse than that of the entire developing world.

The ‘fruits’ of economic progress are not limited to money. Free-market capitalism can hinderthe distribution of essential needs to average people. In the pharmaceutical industry, for example, companies like Eli Lilly and Pfizer have lobbied to make it illegal for Americans to buy cheaper prescription drugs from Canada and Europe. Worse yet, they pay competitors to keep generic drugs out of the market, thus ensuring that their more expensive drugs are the only option. On a global scale, it has been estimated that less than 10 percent of the budget for health research is spent on diseases that cause 90 percent of the world’s illnesses.

They want to cut the benefits that workers have earned through long years of payroll tax contributions. Tax expenditures, on the other hand, which include subsidies from special deductions, exemptions, exclusions, credits, capital gains, and loopholes – and which mostly benefit the rich – are estimated to be worth 7.4% of the GDP, or about $1.1 trillion. That is more than enough to pay for Social Security.

5. The Super-Rich are the Most Productive Americans – They Earn Everything They Make

It’s confounding to hear the claim that America’s highest earners deserve all they get when billion-dollar incomes are made by betting on mortgages to fail, or by betting on global food prices to rise.

John Paulson conspired with Goldman Sachs to create packages of risky subprime mortgages and then short-sell (bet against) the sure-to-fail financial instruments. The ploy paid him $3.7 billion.

Goldman Sachs’ commodities index, notes Chris Hedges, “is the most heavily traded in the world. Goldman Sachs hoards rice, wheat, corn, sugar and livestock and jacks up commodity prices around the globe so that poor families can no longer afford basic staples and literally starve.” Numerous sources agree that speculation drives up commodity prices. Wheat, for example, rose in price from $105 to $481 in just eight years.

Except for such money-making assaults on human need, the financial activities of the wealthiest Americans tend to be very safe. Marketwatch estimates that over 90% of the assets owned by millionaires are held in a combination of low-risk investments (bonds and cash), the stock market, and real estate. The super-rich don’t have to be productive. Thanks primarily to their investments in the stock market the richest 400 Americans took $300 billionin 2013, about the same amount as the entire safety net.

Hypocrite of the Day?

Perhaps Exxon CEO Rex Tillerson, who criticized fracking regulations for “holding back the American economic recovery,” and then protested when a fracking water tower was to be built near his home. Or maybe banker Camden R. Fine, who called Post Office Banks “the worst idea since the Ford Edsel,” even though low-income families pay almost 10 percent of their income in fees to traditional banks.

The hypocrisy keeps on coming, and our country’s wealth keeps moving up to the hypocrites.