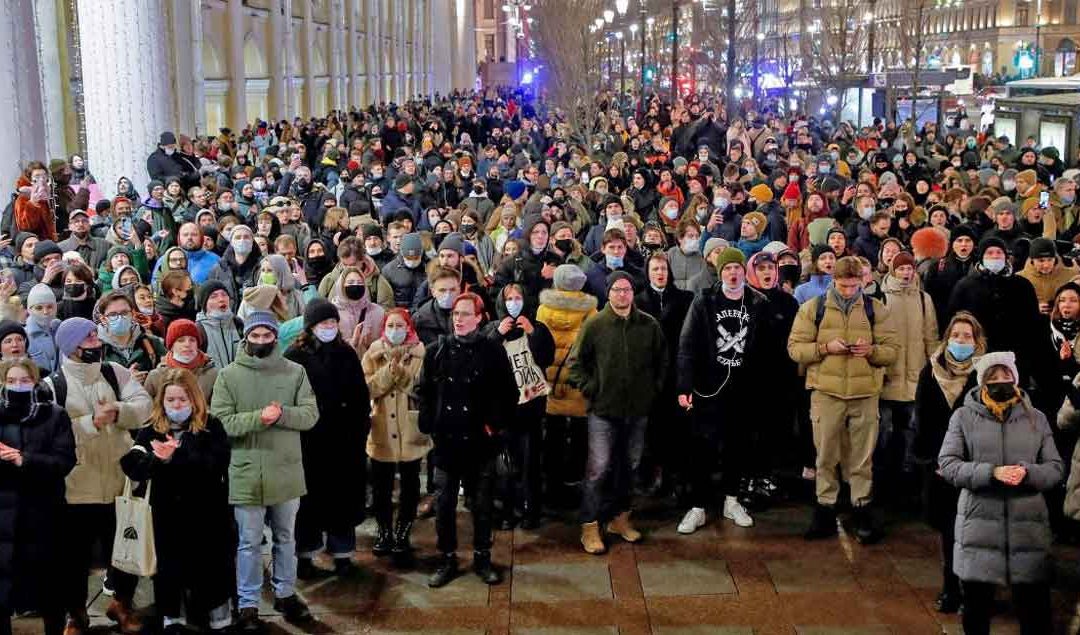 “Now is the time to stand in solidarity with the incredibly brave Russian people who are bravely resisting this aggression by holding huge anti-war protests,” said U.S. Sen. Bernie Sanders.

Hundreds of anti-war protesters were detained in Russia on Friday following over 1,800 arrests the previous day, as Russian President Vladimir Putin directed a brutal and long-anticipated invasion of Ukraine.

Freedom for us”
says that small placard put on a tree https://t.co/mpXnjKzFXc

The independent monitoring group OVD-Info said on its website that “622 people have already been detained in 28 cities” as of 4:03 am in Moscow on Saturday.

“I felt extremely ashamed and helpless,” one Russian demonstrator said of the invasion. The 20-something school teacher asked The Moscow Times for anonymity to protect against reprisals.

“It was important for me to show that Putin’s decision is not the people’s decision,” she said of protesting in Moscow. “Not even close.”

Protesters knew they risked arrest as they took to the streets across Russia, with authorities warning “negative comments” about the invasion would be treated as “treason.”

In a Friday statement denouncing the invasion, a spokesperson for United Nations High Commissioner for Human Rights Michelle Bachelet said that “we are also disturbed by the multiple arbitrary arrests of demonstrators in Russia who were protesting against war yesterday.”

“We understand more than 1,800 protesters were arrested,” the spokesperson noted. “It is unclear whether some have now been released. Arresting individuals for exercising their rights to freedom of expression or of peaceful assembly constitutes an arbitrary deprivation of liberty. We call on the authorities to ensure the immediate release of all those arbitrarily detained for exercising these rights.”

Despite that call from the U.N. and similar criticism from around the world, arrests of anti-war protesters in Russia continued Friday.

Russians’ protests and arrests came as the North Atlantic Treaty Organization (NATO) activated parts of its Response Force, calls mounted for an investigation of Russia’s alleged war crimes, and civilians in Ukraine sought safety as their president, Volodymyr Zelenskyy, warned that Friday night “will be very difficult” while Putin’s forces advanced on the capital city of Kyiv.

An anti-Lavrov protest at Lavrov’s alma mater in Moscow https://t.co/WjjNPwpx48

In a series of tweets on Friday, Anton Barbashin, editorial director of Riddle, an online journal on Russian affairs, explained the risks that protesters face.

For years, the “Russian legal and political system has been repressing the most active civic society leaders, those capable of gathering support for street activity,” and the government adapted a “multitude of laws that penalize protests of any kind,” he wrote.

“Despite all that… we are seeing massive protests all across the country for the second day in the row,” he noted. “That is both inspiring and astonishing. I would like this to be known and reported. That Russians showed their disagreement with what Putin does to Ukraine.”

Here is a good explainer to what was done in 2021 alone in terms of adapting political system to a more war-like authoritarian rail https://t.co/RR064OAgNA
With first and by most elimination of the main opposition force – Navalny and his organization 3/13

Some public figures around the world recognized the bravery of Russian anti-war protesters.

“Now is the time to stand in solidarity with the incredibly brave Russian people who are bravely resisting this aggression by holding huge anti-war protests,” said U.S. Sen. Bernie Sanders (I-Vt.). “In an authoritarian country like Russia, protest is an extraordinary act of courage.”

“In my view, the most important thing we can do right now is stand in solidarity with the Ukrainian people against this war, and with the Russian people who are risking so much to demonstrate against this corrupt, reckless president who started it,” he added. “Putin and his oligarch friends seek a divided world and the destruction of democracy. We seek a different world.”

“It is outrageous, if unsurprising, that Trump would praise Putin’s murderous invasion of Ukraine as an act of ‘genius.’ It should concern us all that Putin is exactly the kind of leader Trump would like to be.”
— Senator @BernieSanders on the real Trumphttps://t.co/UFs0J01rit

“Everyone is shocked and heartbroken,” Alina, a 24-year-old in Moscow, told VICE. “I am half Ukrainian and so are many of my friends.”

“My father’s family is from a town that sits on the border between Russia and Ukraine, near Donetsk and Lugansk,” she noted, referencing territories in eastern Ukraine that have become self-declared “people’s republics” formally recognized as independent by Putin.

“This conflict feels very personal to me,” she said. “My friends and I are going to the protest in Moscow today. It scares me a lot because you can go to jail for at least 15 days for this—and sometimes the consequences are even worse. But we can’t sit and watch how our government is basically killing people and ruining lives.”

Russian police detained not only demonstrators but also journalists covering the protests.

This is the moment @asluhn was arrested while covering anti-war protests in Moscow for VICE World News.

He was detained on Thursday night, along with many other demonstrators in Pushkin Square, and only released when his press ID was confirmed. pic.twitter.com/xzkNAg4FMP

The Associated Press reported Friday that “Yelena Chernenko, a journalist with the Kommersant daily, said she was kicked out of the Foreign Ministry pool over an open letter condemning the attack on Ukraine that has been signed by nearly 300 reporters.”

According to the AP:

Chernenko said on the messaging app Telegram that the ministry cited her ‘lack of professionalism,’ and she urged officials not to retaliate against journalists who signed the letter.”

“Apparently such are the times,” Chernenko wrote of the ban she now faces.

Another journalist facing trouble was Yury Dud. Like many others on Thursday, Dud, a vocal Kremlin critic who runs one of the most popular YouTube blogs in Russia, wrote an elaborate social media post decrying the invasion of Ukraine.

On Friday, an influential Kremlin-backed internet watchdog group, the League of Safe Internet, filed a request with the Prosecutor General’s office and the Justice Ministry to consider labeling Dud a “foreign agent”—a crippling designation that implies additional government scrutiny and strong pejorative connotations that would discredit him.

“Yesterday, Russian authorities ordered us to stop the independent fact-checking and labeling of content posted on Facebook by four Russian state-owned media organizations. We refused. As a result, they have announced they will be restricting the use of our services,” said Nick Clegg, president of global affairs a Meta, the social media network’s parent company.

“Ordinary Russians are using our apps to express themselves and organize for action. We want them to continue to make their voices heard, share what’s happening, and organize through Facebook, Instagram, WhatsApp, and Messenger,” he added, referencing other Meta platforms.

More than 620,000 people have signed a Change.org petition for Russians opposed to Putin’s military action, calling for an immediate withdrawal from Ukraine and appealing to “all sane people in Russia” to join the anti-war movement.

People around the world have been protesting Russia’s invasion of #Ukraine, and still are. The UN General Assembly members must step up. Lives, safety and well-being of millions of civilians is at stake. pic.twitter.com/xE0qH7f6Uz

Russian celebrities are speaking out against the deadly invasion.

Rapper Oxxxymiron—who canceled six sold-out concerts in Moscow and St. Petersburg to protest Putin’s assault of Ukraine—said, “I know that most people in Russia are against this war, and I am confident that the more people would talk about their real attitude to it, the faster we can stop this horror.”

“This is a crime and a catastrophe,” he said of the invasion, according to The New York Times. “I cannot entertain you when Russian missiles are falling on Ukraine… When residents of Kyiv are forced to hide in basements and in the metro, while people are dying.”

Pitchfork reported Friday that “several other Russian musicians—including Kasta, Shym, Vladi, Khamil, Zmey, and Noize MC—voiced their opposition to the attack on Ukraine.”

Because Russia is not Putin https://t.co/UeFF128Msn

“In these moments you realize that my match is not important. It’s not about my match, how it affects me. What’s happening is much more terrible,” Rublev said of the invasion on Thursday, according to Reuters.

“You realize how important [it] is to have peace in the world and to respect each other no matter what, to be united. It’s about that,” he added. “We should take care of our Earth and of each other. This is the most important thing.”