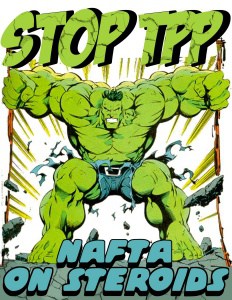 A law affecting content on the Internet that was rejected by Congress shows up in a trade agreement designed to bypass and override Congress. Small, innovative companies that manufacture low-cost, generic drugs find their products blocked.

Those are examples of what is in store based on provisions in the Trans-Pacific Partnership (TPP), which is now being negotiated by the United States and 11 other nations, that have been leaked to the public. The leaks appear to show that provision after leaked provision will take power away from democracy and countries and hand it to the biggest corporations. No wonder these giant, monopolistic corporations want Congress to approve Fast Track before they – and We the People – get a chance to read the agreement.

Because of these leaks we know that the TPP has an intellectual property section that will override government rules that limit the power giant corporations can wield against smaller competitors and the general public. Intellectual property (IP) is a term that covers patents, copyrights, trademarks, trade secrets, industrial designs and similar ‘intangible assets.” (Click here for the IP chapter that was leaked to Wikileaks.)

The rigged process in which only giant corporate interests are represented at the talks of course produces results that are more favorable to those giant corporations than to their smaller, innovative competitors and regular people around the world. The rigged “fast track” process enables these interests to push the agreement through Congress before there is time to organize a public reaction.

TPP is a “trade” agreement that has little to do with trade and everything to do with giving the giant corporations the power to override what governments and their people want. The agreement follows the pattern of the trade agreements that have forced millions of jobs and tens of thousands of factories out of the United States, placed giant corporations in a dominant-power position that is threatening our democracy and sovereignty, and have dramatically accelerated the transfer of wealth from regular people to a few billionaires worldwide.

TPP is being negotiated in secret with consumer, environmental, labor, health, human rights and other “stakeholder’ groups excluded from the table. But the interests of the giant corporations are at the table, with the negotiators either already well-compensated by the corporate interests or in a position to be well-compensated later after leaving government (which many of them tend to do immediately after ending their role in trade negotiations).

To help push TPP through, the giant corporations are trying to get Congress to give up its constitutional responsibility to initiate and carefully consider the terms of trade agreements. The corporations are pushing for Congress to pass “fast track” trade promotion authority, which brings in a process where Congress gets a very limited amount of time after first seeing the agreement to evaluate it and then vote, limits how much they can debate it and prohibits them from amending it in any way. This gives the corporations the opportunity to set up a huge PR campaign to pressure Congress to pass it, before the public has time to organize a response – never mind even read the agreement.

One example of the way the intellectual property provisions favor giant, multinational corporations over smaller, innovative corporations and regular people around the world is in pharmaceutical prices.

A company with a drug patent is granted a monopoly to sell the drug at any price they choose with no competition. Currently a drug might be patented for a limited number of years in different countries. When the patent runs out other companies are able to manufacture the drug and the competition means the drug will sell at a lower cost.

Leaked documents appear to show that TPP will extend patent terms for drugs. Countries signing the agreement will scrap their own IP rules and instead follow those in TPP. So giant drug companies will have the same patent in all countries, for a longer period, and the patent will prevent competition that lowers drug prices.

Currently smaller, innovative companies can produce “generic” drugs after patents run out. Because of competition these drugs can be very inexpensive. Walmart, for example, sells a month’s supply of many generic drugs for $4, while drugs still under patent protection can cost hundreds or even thousands. This is of particular concern to poor countries that will be under TPP rules.

The TPP would provide large pharmaceutical firms with new rights and powers to increase medicine prices and limit consumers’ access to cheaper generic drugs. This would include extensions of monopoly drug patents that would allow drug companies to raise prices for more medicines and even allow monopoly rights over surgical procedures. For people in the developing countries involved in TPP, these rules could be deadly – denying consumers access to HIV-AIDS, tuberculosis and cancer drugs.

What You Can See, Do And Say On The Internet

Another area where the IP section of TPP could give corporations tremendous power is in deciding what regular people can see, do or say on the Internet. TPP will override our own rules, even imposing laws like the Stop Online Piracy Act (SOPA) and Protect IP Act (PIPA) that Congress have specifically rejected.

You might remember when many websites on the Internet “went dark” for 24 hours to protest the proposed SOPA and PIPA laws. According to the Electronic Freedom Foundation’s (EFF) SOPA/PIPA: Internet Blacklist Legislation,

The “Stop Online Piracy Act”/”E-PARASITE Act” (SOPA) and “The PROTECT IP Act” (PIPA) are the latest in a series of bills which would create a procedure for creating (and censoring) a blacklist of websites. These bills are updated versions of the “Combating Online Infringements and Counterfeits Act” (COICA), which was previously blocked in the Senate. Although the bills are ostensibly aimed at reaching foreign websites dedicated to providing illegal content, their provisions would allow for removal of enormous amounts of non-infringing content including political and other speech from the Web.

… Had these bills been passed five or ten years ago, even YouTube might not exist today — in other words, the collateral damage from this legislation would be enormous.

Larry Magid explained at the time, in What Are SOPA and PIPA And Why All The Fuss?

The bill would require sites to refrain from linking to any sites “dedicated to the theft of U.S. property.” It would also prevent companies from placing on the sites and block payment companies like Visa, Mastercard and Paypal from transmitting funds to the site. For more, see this blog post on Reddit.

The problem with this is that the entire site would be affected, not just that portion that is promoting the distribution of illegal material. It would be a bit like requiring the manager of a flea market to shut down the entire market because some of the merchants were selling counterfeit goods.

… Opponents say it would create an “internet blacklist.”

… There is also worry that SOPA and PIPA could be abused and lead to censorship for purposes other than intellectual property protection.

Congress decided to reject SOPA and PIPA. But the provisions of SOPA and PIPA are back, this time in the TPP, which would override what Congress wants.

We’ve seen how this works too many times. The giant corporations promise jobs and prosperity to get their way, but then We the People end up with fewer jobs and a falling standard of living while a few billionaires and executives pocket the difference. Instead of letting the giant corporations push through yet another job-killing agreement that gives them even more wealth and power let’s take control of things and fix the agreements that have hurt us, our economy and our democracy. Fix NAFTA First!

Dave Johnson is a contributing blogger for the Campaign for America’s Future.