How to Lose the War on Terror: Ban Muslim Refugees 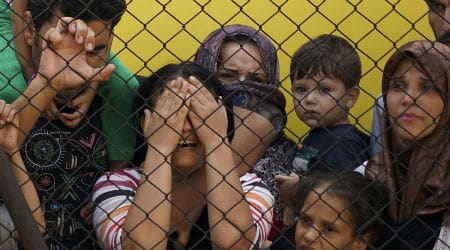 by Robin Wright
The New Yorker

Last July, anguished by the war in Syria and the plight of millions fleeing the grisly six-year conflict, Andrea Dettelbach e-mailed her rabbi at Temple Sinai, in Washington, D.C. She suggested that the synagogue sponsor a Syrian refugee family. He agreed. Temple Sinai has since raised “unbelievable amounts of money” for the family, she told me, found cell phones to give when they arrive, organized a life-skills team to help with everything from banking to education, and lined up doctors, including a female internist who speaks Arabic. Dettelbach’s basement is full of boxes, of donated furnishings, clothing, a television. “One member of the congregation decided, instead of giving gifts last year, to buy all new pots and pans in the names of her friends.” Temple Sinai partnered with Lutheran Social Services to launch the complex process.

The wait was almost over. “We were expecting a family within a week or two,” she said. “This is the history of the Jewish people and a commitment to helping those in need. As an American, it’s opening our doors to those who seek refuge. It’s who we are as a people. How can we turn our back on them?”

On Wednesday, a draft executive order circulated that would call for an end to all processing and admission of Syrian refugees in the United States. The arrival of Temple Sinai’s refugee family, who have been waiting for years and come so close to finding a safe haven, has now been put off indefinitely, Dettelbach told me. “They were vetted to an inch of their lives. It’s insane to hold them accountable for what is going on in their country—or in our country.”  CONTINUE READING AT THE NEW YORKER

Jihadi movements will almost certainly exploit the move as proof that the West is at war with the world’s 1.7 billion Muslims.