How the NSA Helps the US Assassinate 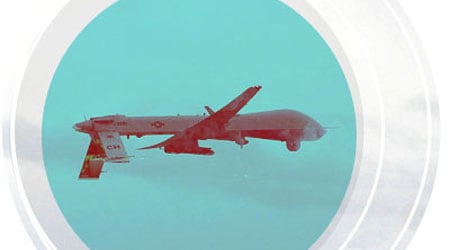 In the first investigative piece co-written for their new media venture, journalists Glenn Greenwald and Jeremy Scahill on Monday published a much-anticipated story—based on eye-witness accounts and leaked documents from whistleblower Edward Snowden—describing how the National Security Agency uses its digital surveillance capabilities to assist the CIA and Pentagon as they carrying out controversial overseas assassinations ordered by President Obama.

Published under the masthead of ‘The Intercept‘ at their new First Look website, Greenwald and Scahill report:

The National Security Agency is using complex analysis of electronic surveillance, rather than human intelligence, as the primary method to locate targets for lethal drone strikes – an unreliable tactic that results in the deaths of innocent or unidentified people.

According to a former drone operator for the military’s Joint Special Operations Command (JSOC) who also worked with the NSA, the agency often identifies targets based on controversial metadata analysis and cell-phone tracking technologies. Rather than confirming a target’s identity with operatives or informants on the ground, the CIA or the U.S. military then orders a strike based on the activity and location of the mobile phone a person is believed to be using.

The drone operator, who agreed to discuss the top-secret programs on the condition of anonymity, was a member of JSOC’s High Value Targeting task force, which is charged with identifying, capturing or killing terrorist suspects in Yemen, Somalia, Afghanistan and elsewhere.

His account is bolstered by top-secret NSA documents previously provided by whistleblower Edward Snowden. It is also supported by a former drone sensor operator with the U.S. Air Force, Brandon Bryant, who has become an outspoken critic of the lethal operations in which he was directly involved in Iraq, Afghanistan and Yemen.

The explosive story about the relationship between the NSA, CIA, JSOC, and the White House which executes individuals abroad—including American citizens—was first mentionedby Scahill in September of last year when he announced discussions between himself, Greenwald, and eBay co-founder Pierre Omidyar to launch their own journalistic enterprise.

Appearing to fulfill their goal of providing a more adversarial form of journalism than their mainstream counterparts, the NSA refused to respond to questions posed by Scahill and Greenwald for their investigation. However, Caitlin Hayden, a spokesperson for the National Security Council, did release a statement explaining the government’s position that “the type of operational detail that” upon which their questions were based “in our view, should not be published.”

Strikingly, on the same day as the Scahill/Greenwald article was published, an Associated Press story—citing numerous “unnamed” U.S. officials—posited as a dilemma the White House’s pending decision to possibly assassinate an American citizen living overseas who the government accuses of being a member of al-Qaeda.

In contrast to not speaking with Greenwald and Scahill, the government officials—hiding behind provided anonymity—seemed very willing to give away lots of potentially telling information about the alleged U.S. target.

Two of the officials described the man as an al-Qaida facilitator who has been directly responsible for deadly attacks against U.S. citizens overseas and who continues to plan attacks against them that would use improvised explosive devices.

But one U.S. official said the Defense Department was divided over whether the man is dangerous enough to merit the potential domestic fallout of killing an American without charging him with a crime or trying him, and the potential international fallout of such an operation in a country that has been resistant to U.S. action.

Another of the U.S. officials said the Pentagon did ultimately decide to recommend lethal action.

The officials said the suspected terrorist is well-guarded and in a fairly remote location, so any unilateral attempt by U.S. troops to capture him would be risky and even more politically explosive than a U.S. missile strike.

Under new guidelines Obama addressed in a speech last year to calm anger overseas at the extent of the U.S. drone campaign, lethal force must only be used “to prevent or stop attacks against U.S. persons, and even then, only when capture is not feasible and no other reasonable alternatives exist to address the threat effectively.” The target must also pose “a continuing, imminent threat to U.S. persons” — the legal definition of catching someone in the act of plotting a lethal attack.

The Associated Press has agreed to the government’s request to withhold the name of the country where the suspected terrorist is believed to be because officials said publishing it could interrupt ongoing counterterror operations.

The officials spoke on condition of anonymity because they were not authorized to discuss the classified drone targeting program publicly.