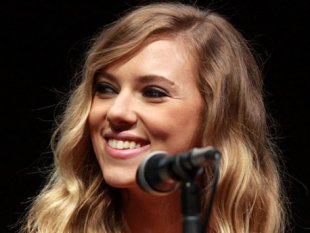 The actress Scarlett Johansson is enamored with the Israeli-owned company SodaStream, and now she has the chance to show the world. Johansson, famous for her roles in movies like Her and Lost In Translation, inked a deal with SodaStream, the producer of home carbonation devices that create seltzer water or flavored sodas, on January 10 to become their first international spokesperson.

Johansson’s newfound role will be prominently featured during the Super Bowl on February 2. TV viewers will see Johansson in a commercial for SodaStream touting the ability of consumers to make their own bubbled water.

“I think it was really a natural partnership because I’ve been using SodaStream for five or six years, and it’s a product I found on my own because I like carbonated water but I hated the waste of bottles,” Johansson said in a preview video for the Super Bowl ad. “My favorite thing about SodaStream is that I don’t feel guilty when I enjoy beverages at home.”

But activists and supporters of the Palestinian-led boycott, divestment and sanctions (BDS) movement targeting Israel are now trying to make Johansson feel guilty enough to break off the multiyear deal with the soda making company. The reason? SodaStream’s main factory is located in an illegal settlement in the Israeli-occupied West Bank. Johansson won’t hear the end of it until she’s no longer beautifying a war crime under the Geneva Convention. What was supposed to be a boon for the company, whose stock recently slid, has turned into a potential debacle as media coverage pointing to SodaStream’s location in the settlement of Mishor Adumim mounts.

After days of criticism, Johansson responded to the controversy by saying she “never intended on being the face of any social or political movement” and that she stands “behind the SodaStream product.”

Johansson remains under pressure on a variety of fronts. Activists for Palestinian rights, including the groups CodePink and the U.S. Campaign to End the Israeli Occupation, have set up a petition calling on the actress to “end your recent agreement to become a Global Brand Ambassador for SodaStream.” The company is “actively supporting Israel’s military occupation of the West Bank, including the environmental destruction this occupation has brought to Palestinian lands,” the groups’ petition states.

In addition, Palestine solidarity activists have been emailing Oxfam over Johansson’s deal with SodaStream. Johansson is a “global ambassador” for Oxfam, a humanitarian relief organization that has an explicit policy against Israeli settlements and has cutoff ties with other ambassadors for the group who affiliate with settlement products.

Oxfam’s leadership has heard the calls from activists. In an email reply to someone describing Johansson’s deal with SodaStream, Oxfam UK CEO Mark Goldring lauded Johansson’s work with the group but said that “Oxfam is opposed to trade from Israeli settlements, in which Sodastream is engaged. Israeli settlements are illegal under international law and have a devastating effect on the lives and livelihoods of the Palestinian communities that Oxfam works with…We have made our concerns known to Ms. Johansson and we are now engaged in a dialogue on these important issues.”

Still, Oxfam has yet to take the leap of dropping Johansson as a global ambassador. The New York Times’ Lede blog reportedthat an Oxfam spokesman said “that the group had not asked Ms. Johansson to withdraw from her endorsement deal with SodaStream.” Activists have shot back, saying Oxfam has an obligation to drop Johansson as long as she violates the organization’s policy on settlement products.

Oxfam isn’t the only place whacking Johansson for her SodaStream deal. Media outlets have also raised questions about the partnership. New York magazine’s Kat Stoeffel wrote a piecequoting someone who called SodaStream a company that makes “Palestinian blood cocktails.” The New Yorker’s Emily Greenhouse warned that the “dust-up could impact her image.”

Johansson’s role could also lead to more scrutiny of SodaStream, which has been touted as an environmentally friendly company. The company has made enormous inroads into the American market. Its products are sold in Target, Bed Bath & Beyond, Best Buy, Macy’s and others. In 2012, the company garnered $436 million in profits, a 51% increase from 2011, though its stock recently slid due to profit projections being off. Still, the company earned $562 million last year, with its net income coming in at $41.5 million.

SodaStream’s factory is located in the industrial settlement of Mishor Adumim, which benefits from Israeli government policies that give tax breaks to settlement companies. Under the Geneva Conventions, an occupying power (Israel has controlled the Palestinian West Bank since 1967) is prohibited from altering occupied land by transferring its own citizens there or building industry. A United Nations report issued last year said that settlements could amount to war crimes.

Mishor Adumim is part of the “Adumim bloc” that includes Ma’ale Adumim, a major Israeli settlement outside of Jerusalem. These settlements were built on the confiscated land of a number of Palestinian villages, and displaced Jahalin Bedouins from their land when built. Mishor Adumim serves Ma’ale Adumim by providing the settlement with employment for Israelis. The settlement bloc Mishor Adumim is a part of is strategically located to form a ring around occupied East Jerusalem—which Israel says is exclusively Israeli, despite it being an integral part of Palestinian life and business—and cuts the West Bank off from the holy city.

SodaStream has tried to brush off these concerns by pointing out that it employs Palestinians in its factory and fosters coexistence. About 500 Palestinians from the West Bank travel to the SodaStream factory every day to work. Daniel Birnbaum, CEO of SodaStream, said in a video produced by a pro-Israel group that “we give them an opportunity to not only have a job and health insurance, but also social benefits.”

That video also touted a mosque on the land where SodaStream operates. In her statement released to the Huffington Post on the controversy, Johansson echoed SodaStream’s sentiments about coexistence. “I remain a supporter of economic cooperation and social interaction between a democratic Israel and Palestine,” she said. “SodaStream is a company that is not only committed to the environment but to building a bridge to peace between Israel and Palestine, supporting neighbors working alongside each other, receiving equal pay, equal benefits and equal rights. That is what is happening in their Ma’ale Adumim factory every working day.”

But those claims are hardly the full story. It’s no surprise that many Palestinians work on the very same settlements that displace them, given that the Israeli occupation has brought ruin to the Palestinian economy and caused high unemployment. Palestinian workers are a captive labor market Israeli companies can exploit.

A report issued by the Israeli activist group Who Profits? outlined major labor rights concerns at SodaStream’s factory in Mishor Adumim. Workers are discouraged from organizing for better wages, and have been fired if they do, though on one occasion they were rehired when the press caught wind. One Israeli labor group, Kav LaOved, reported that Palestinian workers don’t earn minimum wage, and are scared to demand their rights for fear of being fired.

An article by the Electronic Intifada’s Stephanie Westbrook bolstered the claims of Palestinian workers who complain of conditions at SodaStream’s factory. One anonymous worker told the publication that Palestinians are reduced to doing the hard labor, while Ashkenazi Israeli Jews run the management side. There is reportedly no extra pay for overtime or night shifts, and according to the Electronic Intifada, workers labor for “four days, 12 hours per day, with two days off — totaling 60 hours of work in a seven-day period.”

The article also casts doubt on SodaStream’s claims about the mosque. “Those claims are all false. There is a full discrimination against the [Muslim] workers and we are denied our right to practice our religion,” the worker told the Electronic Intifada. The mosque is “just the locker room,” the worker said, claiming that supervisors tried to hide prayer carpets to hinder prayer and that Palestinians are only allowed to pray during their lunch break.