How Many Civilians Can We Kill? 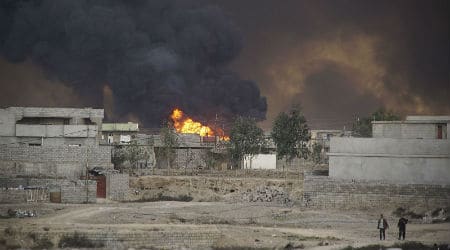 Robert C. Koehler, Common Dreams: How Many Civilians Can We Kill?

The tremor I feel in these words goes deeper than another Trump controversy: “the number of civilian casualties acceptable to war planners . . .” Even if these words were more than just PR blather and had a core of moral integrity, they stop me in my tracks. Of course, there’s nothing surprising here. This is how war works, especially today, when battlefields are coterminous with civilian living and working space.

If you read the headlines of major corporate media outlets, you’d think hundreds of Iraqi civilians coincidentally died in the same location that just so happened to be hit by a US airstrike. ABC News took the cake, giving its report the disjointed title “US Reviewing Airstrike That Corresponds to Site Where 200 Iraqi Civilians Allegedly Died.”

Juan Cole, Informed Comment: “Some” US Responsibility for Civilian deaths; but Iraqi PM lashes out at Critics

As US commanders begin confessing that it is likely that the US military bears responsibility for last Thursday’s errant airstrike that killed as many as 200-300 innocent civilians, America’s Iraqi partner Prime Minister Haydar al-Abadi disagreed, lashing out at critics.

Listed are all known reports for March to April 2017 – via generally credible sources unless otherwise indicated – of non-combatant and ‘friendly fire’ deaths allegedly caused by the US-led Coalition in Iraq and Syria.