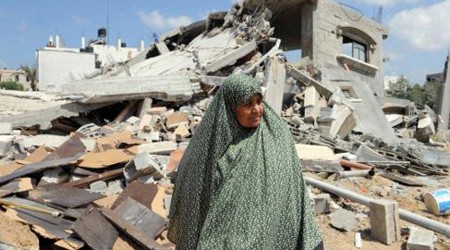 On Monday, Israeli warplanes fired 182 missiles into Gaza, Israeli ships launched 146 shells into the territory, and Israeli tanks shot 721 shells, with all these attacks striking 66 structures and killing 107 Palestinians (including 35 children), while Hamas launched 101 rockets toward Israel, and 13 Israeli soldiers were killed. That day, the State Department announced that the United States would be providing $47 million “to help address the humanitarian situation in Gaza.” A third of these funds would go to the United Nations Relief and Works Agency for Palestine Refugees in the Near East (UNRWA), which is providing food, water, and shelter to tens of thousands of war-affected Palestinians in Gaza. So once again, US taxpayers are in an absurd place: They are partly paying for the Israeli military action in Gaza and funding the clean-up.

Each year, the United States gives Israel about $3.1 billion in military assistance, a commitment that stems from the 1978 Camp David accord that led to peace between Israel and Egypt. Those billions are roughly divided into two funding streams. About $800 million underwrites Israeli manufacturing of weaponry and military products. The rest finances what is essentially a gift card that the Israeli military uses to procure arms and military equipment from US military contractors. It can be safely assumed, says a US expert on aid to Israel, that all units of the Israel Defense Forces benefit from US assistance—and this obviously includes those units fighting in Gaza. So to a certain degree, the destruction in Gaza does have a made-in-the-USA stamp.

But at the same time, the US government is financing efforts to deal with the awful consequences of Israeli attacks. The UNWRA noted in a July 21situation report that it is operating 67 shelters that are harboring more than 84,000 Palestinians. It is distributing food (in one day, nearly 55,000 tins of tuna and 16,000 loaves of bread), water, baby hygiene kits, blankets, and mattresses to these shelters. It is removing solid waste. It is running up to 21 health clinics, as security permits. The report notes that UNWRA’s shelters are overwhelmed with huge numbers of displaced Palestinians, adding: “The continuing conflict is having an impact on delivery of basic services. Despite a strong commitment from UNRWA sanitation staff, the Agency is struggling to maintain solid waste management operations in the context of ongoing escalations in violence and high numbers of [displaced persons] in shelters. This presents a potential serious public health risk.” The report also says the UNRWA is trying to educate children to leave unexploded ordnance alone.

The UNRWA, not surprisingly, reflects the policy perspective of the UN and UN Secretary-General Ban Ki-Moon. Its website notes that Ban recently called the killing of civilians in Gaza an “atrocious action.” The site also describes the current crisis this way: “This is the third war in five and a half years endured by the people of Gaza. As with previous conflicts, there is nowhere for women, men, and children to escape to. The strip is densely populated and the seven-year Israeli-imposed blockade means that people’s movement to and from Gaza remains virtually banned.” Last week, the UNRWA condemned unidentified parties that had placed 20 rockets in one of its facilities, a vacant school.

According to the UNRWA, 75 of its facilities in Gaza, including schools and warehouses, have been damaged in the fighting. Presumably, some of the $15 million being sent to the agency by the United States—which covers a quarter of an emergency appeal for $60 million issued by the UNRWA—will be used to repair or replace UNRWA installations destroyed by the US-funded Israeli military.

The new package of US assistance includes $3.5 million in funding for Mercy Corps, Catholic Relief Services, and other nongovernmental organizations. According to the State Department, Mercy Corps will use some of this money to supply non-food items to displaced Palestinians and extend a short-term employment program for 3,000 people in Gaza and a “psycho-social support program” assisting about 2000 families. Catholic Relief Services will provide medical supplies and fuel for medical facilities.

The United States, according to the State Department, is UNRWA’s largest donor, and has provided over $265 million to the agency this year to help Palestinian refugees in Gaza and other regions of the Middle East, including $9 million for the construction of new schools and distribution centers in Gaza. A US taxpayer might wonder if in recent days any of those schools—or students attending them—have been struck by an Israeli missile subsidized by the United States.