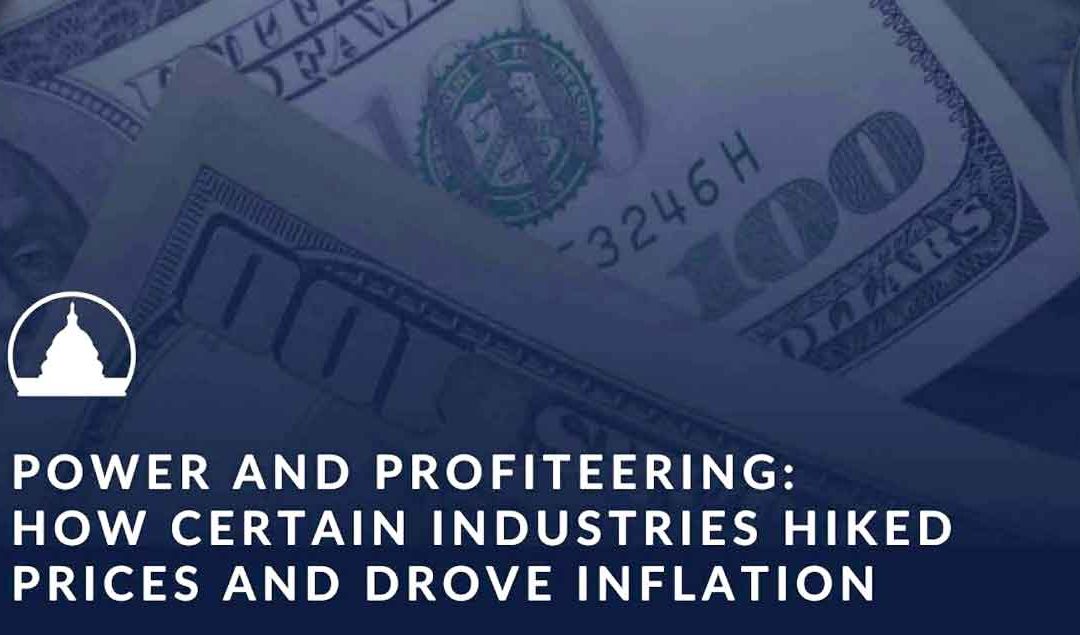 Certain corporations are using the cover of inflation to raise prices excessively, resulting in record profits and profit margins at the expense of consumers.

A report released Friday by a panel of the U.S. House Committee on Oversight and Reform highlighted how “certain corporations are using the cover of inflation to raise prices excessively, resulting in record profits and profit margins” at the expense of consumers.

The analysis—Power and Profiteering: How Certain Industries Hiked Prices and Drove Inflation—was produced by the House Subcommittee on Economic and Consumer Policy, which held a related hearing featuring testimony from economists in September.

Rep. Raja Krishnamoorthi (D-Ill.), the subcommittee chair, said in a statement that “today’s analysis reaffirms what an overwhelming 80% majority of Americans already recognize according to a recent poll: Under the guise of inflation, certain corporations excessively hiked prices far beyond what their costs necessitated, further driving inflation.”

“As American corporations report their highest profit margins the United States has seen in over 70 years, executives of leading companies are admitting on earnings calls that they’re taking advantage of inflation,” the congressman continued. “One executive argued that ‘a little bit of inflation is always good in our business’ while another admitted that his company’s prices wouldn’t fall with decreasing costs, stating, ‘We don’t reduce prices on the back end of these increases.'”

“It is unacceptable that certain companies and industries are engaged in extreme price hikes under the cover of inflation,” he declared. “Americans understand this is happening, and they want it to stop. We have an obligation in Congress to shine light on this practice, which is exactly what today’s analysis does.”

The document states that an “analysis of financial information from a sampling of the largest corporations in several industries shows massive increases in profits between 2019 and 2021.”

According to the subcommittee:

Specifically, the document says that “studies by the Economic Policy Institute and Roosevelt Institute demonstrate that profits contributed more to price growth in the United States from mid-2020 through the end of 2021 than at any other point from 1979 to the present—and continue to contribute markedly today. This is especially true in highly concentrated industries.”

The document concludes with the assertion that “the federal government can and should play an important role in addressing inflation, including by passing legislation to address excessive price hikes,” and highlights the Inflation Reduction Act, which Democrats finally passed this summer after months of party infighting and opposition from the GOP.

Some progressive lawmakers and policy experts continue to advocate for a windfall profits tax bill to target companies like the fossil fuel giants that have recently raked in massive profits, which they’ve used to benefit shareholders.

The new analysis comes just days before the U.S. midterm elections—which will determine whether Democrats retain control of Congress for the second half of President Joe Biden’s first term—and on the heels of the Federal Reserve announcing yet another interest rate hike.

The sixth rate hike of the year came despite warnings from economists, progressive lawmakers, and other critics that the approach could have “catastrophic outcomes” for working-class people while not actually impacting inflation, due to corporate profiteering.

Notably, as Common Dreams reported, while Fed Chair Jerome Powell took questions about the rate hike from reporters for about 40 minutes on Wednesday, not one of them asked about the impact of corporate profits.

Please support our work with a donation. Thank you.