The ruins of this hall serve as the Hiroshima Peace Memorial to the people who were killed in the atomic bombing of Hiroshima, Japan on August 6, 1945. Over 70,000 people were killed instantly, and another 70,000 suffered fatal injuries from the radiation.

The Trump administration is currently juggling three world hot spots for nuclear issues. We’ll take a look at each one and talk about how activists can help shape the outcomes.

North Korea – Despite two summit meetings between Kin Jung-un and Donald Trump, no progress has been made on nuclear proliferation. North Korea maintains its aresenal of nuclear bombs and signs indicate that they are once again ramping up production of nuclear materials

Iran – Last year, Trump unilaterally abrogated a multi-party agreement with Iran that had successfully brought any nuclear ambitions Iran might have had too a halt. Iran meticulously stuck to the terms of the deal. Now the U.S. and Iran tiptoe up to the verge of war each day.

Russia – Earlier this year, Secretary of State Mike Pompeo announced that the U.S. was “suspending” the Intermediate-Range Nuclear Forces Treaty (INF), negotiated with Russia in 1987. At the same time, the U.S. is developing its first new long-range nuclear weapons since 1991, sparking a new international nuclear arms race. The two moves appear to spell the end of a half-century of nuclear arms control treaties.

Deeply committed to nonviolence and international law, Jackie Cabasso has been continuously active in nuclear disarmament, peace and environmental advocacy for more than three decades. She has had the opportunity to travel widely and has spoken at public hearings, legislative symposia and conferences around the world and has addressed rallies and gatherings at the Livermore and Los Alamos nuclear weapons laboratories, the Nevada and Semipalatinsk nuclear test sites, the French nuclear weapons laboratories, and in Hiroshima and Nagasaki. She has been arrested approximately 50 times in acts of nonviolent resistance to U.S. nuclear weapons and foreign policy at the Livermore Lab, the Nevada Test Site, the White House, and other U.S. military and government facilities. 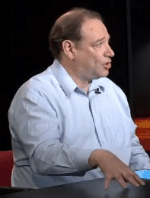 Jon Rainwater is Executive Director of Peace Action and the Peace Action Education Fund. For over 30 years, Jon has been active in campaigns on issues of peace, nuclear disarmament, social justice and environmental sustainability. An experienced policy advocate, he has worked on nuclear issues for Greenpeace, advocated for victims of domestic violence for the California Alliance Against Domestic Violence and served as director for the California League of Conservation Voters. Video of Jon’s appearance on Other Voices TV last year can be seen here.

The forum is a conversation … with you. So come prepared to ask questions or share your opinions.