Bay Area groups will jointly mark the 74th anniversary of the U.S. atomic bombings of Hiroshima and Nagasaki at the Livermore Lab, where the Trump Administration is presently spending billions to create new nuclear warheads.

The Tuesday, August 6, 2019 commemoration is titled, “Designing Armageddon at Livermore Lab: Rally, March and Nonviolent Direct Action for Nuclear Disarmament.” Participants will gather at the northwest corner of the Livermore Lab (Vasco Road and Patterson Pass Road). The rally will begin at 8 AM and will feature music, speakers, poetry, art and more. There is free parking at the event site.

Daniel Ellsberg will deliver the keynote address.  Ellsberg is the military analyst and whistleblower who shone a bright light on U.S. policy and helped end the Vietnam War when he released the Pentagon Papers. Ellsberg published an award-winning memoir in 2017, “The Doomsday Machine: Confessions of a Nuclear War Planner.” He remains a brilliant analyst, commentator and sought-after speaker.

Nobuaki Hanaoka, an atomic bomb survivor, will be the rally’s special guest speaker. Hanaoka was an infant when the bomb fell on Nagasaki on August 9, 1945. His mother and sister died from illnesses linked to radiation poisoning and his brother died at age 39 from premature aging associated with fallout from the bomb. Hanaoka is a retired minister in the United Methodist Church, who came to the U.S. following seminary training in Japan. He has settled in the Bay Area where he speaks, writes and teaches on topics of peace and human rights.

Also featured will be Dr. Sharat G. Lin, who will share analysis and insights from personal visits to Iran and North Korea and Rafael Jesús González, the first poet-laureate of Berkeley and an organizer of the 1983 International Day of Nuclear Disarmament.

Marylia Kelley of Tri-Valley CAREs will present timely knowledge of nuclear weapons activities being carried out today at Livermore Lab and Roxanne, a retired Judge, will discuss Code Pink’s divest from the war machine campaign.

Immediately following the rally program, at approximately 9:15 AM, will be a “call to action,” in which participants will be invited to march a short distance to the Livermore Lab West Gate. At the gate, Chizu Hamada and Japanese activists will lead a traditional bon dance. Everyone is invited to participate.

Following the dance will be a commemorative die-in and symbolic chalking of the bodies to mimic the “shadows” left by men, women and children vaporized by the A-bomb blast. Those who choose will then peaceably risk arrest. Others will conduct a legal witness and support. 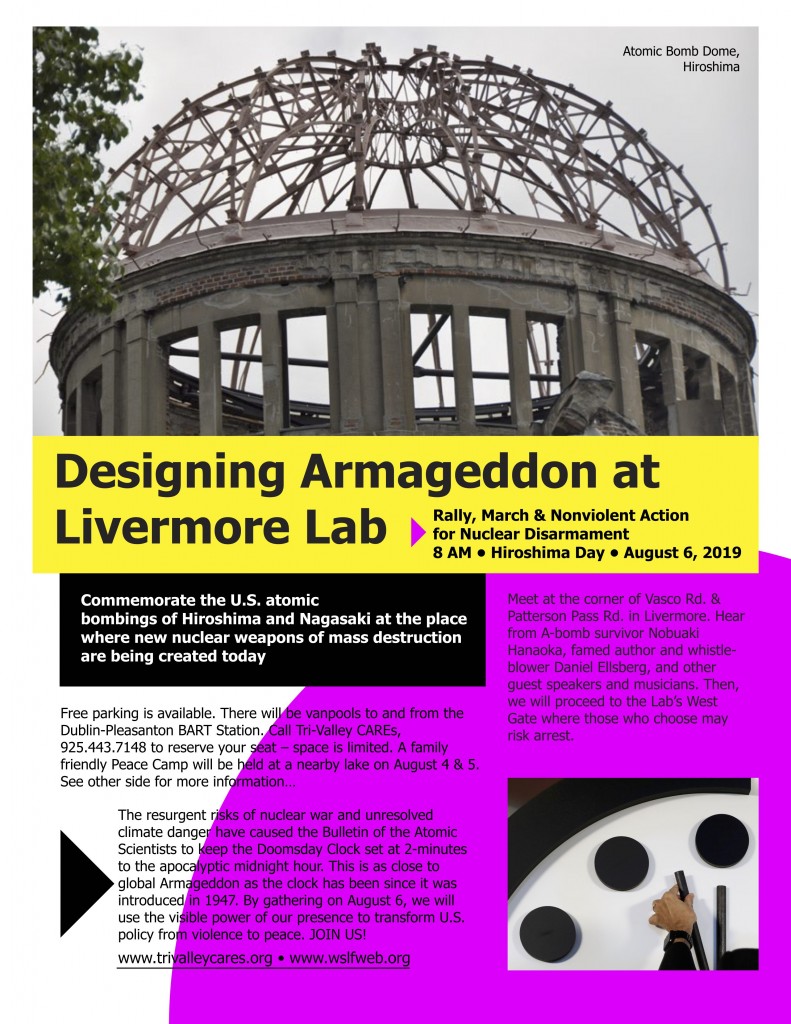