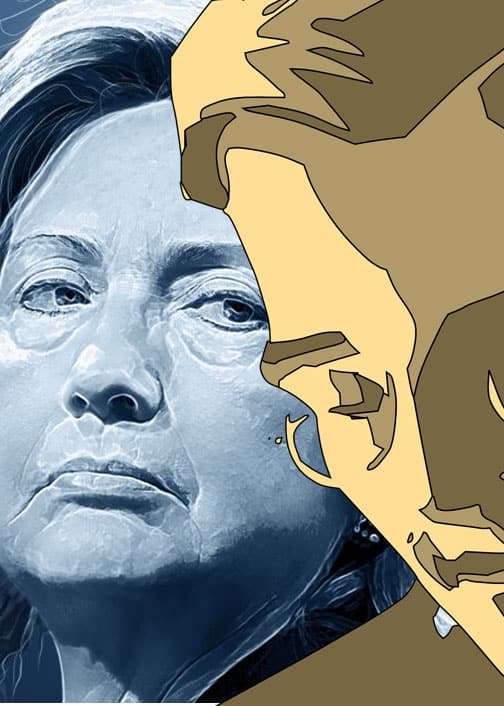 Hillary Clinton on Edward Snowden: “He broke the laws of the United States . . . He stole very important information that has unfortunately fallen into a lot of the wrong hands.  So I don’t think he should be brought home without facing the music.”

But anyway the real source of her annoyance with Snowden is that she believes in Big Government surveillance of the general population, no matter how unconstitutional it is.  (So does Comey).  Hillary Clinton voted for the USA Patriot Act, which gutted the fourth amendment right to protection from unreasonable, warrantless search and seizure of papers and personal effects.  She also voted to renew it in 2005 and 2006.  It was practices that the FBI and NSA alleged were authorized by these laws that Clinton helped pass that constituted the abuses on which Ed Snowden felt compelled to blow the whistle.  She now talks inexcruciatingly vague terms about striking a “balance” between security and democracy, but there is no evidence anywhere that she cares about the invasion of the privacy of millions of Americans online that she has assiduously enabled.

Clinton has also wrongly and irresponsibly said that Ed Snowden could have gone through internal channels to blow the whistle on NSA abuses, and would thereby have gained legal protections.

First of all, no such legal protections exist with regard to his particular circumstances.  A whole string of other intelligence whistleblowers has gone to jail, which is what would have happened to Snowden.  That is not to mention the evidence for dirty tricks played on whistleblowers by government agencies, including the destruction of exculpatory evidence.

Second of all, the NSA has now been forced to admit that Snowden did in factrepeatedly try official channels and was stonewalled.

Clinton should apologize for her earlier allegations about Snowden and acknowledge her mistake in suggesting that he could have blown the whistle through official channels and been legally protected.  She could just ask Thomas Drake if any of that were true.  While she has admitted that the USA Patriot Act vote was a mistake, she should have the decency to admit that she put persons of conscience like Snowden in a position where they had to risk their lives to let Americans know that the National Security State had repealed the Constitution.

At the very least, you would hope that, having almost fallen victim to its vague and unconstitutional provisions, Sec. Clinton would at least now commit to repealing the Espionage Act of 1919, passed at the height of an earlier Trump-style immigration hysteria.  But guess what?  Obama has loved this law to death and used it viciously against whistleblowers, and the likelihood that Clinton will seek to repeal or revise it is low.

The irony is that we may finally be getting ethnic and gender diversity at the top of our politics, but those considerations pall before the distinction between the governmental class and the hoi polloi.

Because on the animal farm, some animals are more equal than others.