The announcement of this year’s Nobel Peace Prize winner, set for October 11, is sure to make big news. The prize remains the most prestigious in the world. But the award has fallen into an evasive pattern, ignoring the USA’s continuous “war on terror” and even giving it tacit support.

In his 1895 will, the dynamite inventor and ammunition magnate Alfred Nobel specified that Norway’s parliament should elect a five-member committee for awarding the prize to “champions of peace.” Yet the list of recent Nobel peace laureates is notably short on such champions. Instead, the erstwhile politicians on the Norwegian Nobel Committee have largely bypassed the original purpose of the prize.

Despite all its claims of independence, the Oslo-based Nobel Committee is enmeshed in Norwegian politics. The global prestige of the Nobel Peace Prize has obscured the reality that its selection committee is chosen by leaders of Norway’s main political parties—and, as a member of NATO, Norway is deeply entangled in the military alliance. 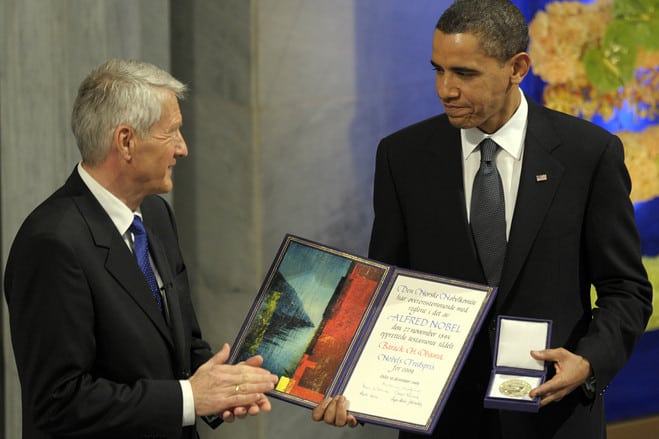 When the Nobel Peace Prize went to President Obama in 2009, he was in the midst of drastically escalating the U.S. war effort in Afghanistan, in tandem with the rest of NATO. The same prize went to the European Union in 2012, a year after many of its member states intervened with military force in Libya. On both occasions, in effect, the Nobel Committee bestowed a “good war-making seal of approval.”

Since 2001, the Nobel Peace Prize has been on a prolonged detour around the U.S. government’s far-flung warfare, declining to honor anyone who had challenged any of it anywhere in the world. But the Nobel Committee has done more than just ignore peace activism seeking to stop U.S.-led war efforts. By giving the Peace Prize to Obama and the E.U., the committee has implicitly endorsed those military efforts as part of a rhetorical process that conflates war-making with peace-making. Orwell’s 1984 specter of “War Is Peace” looms uncomfortably large.

At times, the Peace Prize has earned goodwill in NGO circles by honoring humanitarian work that is laudable but not directly related to peace. And so far in this century, when the Nobel Committee has focused the prize on human rights, it has danced around Uncle Sam’s global shadow. The Peace Prize has gone only to dissidents in countries where governments are in conflict with Washington—such as Shirin Ebadi of Iran in 2003 and Liu Xiaobo of China in 2010—while failing to honor any of the profuse activism against severe abuses by U.S.-backed governments.

It was not always this way. During previous decades, the annual announcement of the Nobel Peace Prize might alternately please or enrage the top leaders in the capital of a world power. In 1983, the awarding of the prize to Poland’s Solidarity leader Lech Walesa infuriated the Kremlin. When the 1992 prize went to Rigoberta Menchu, an indigenous foe of U.S.-supported tyrants killing Guatemalan civilians in large numbers, it was a much-needed rebuke to Washington.

Yes, some Peace Prize choices were dubious or worse. After an Orwellian one, the caustic songwriter Tom Lehrer commented: “Political satire became obsolete when Henry Kissinger was awarded the Nobel Peace Prize.” In an exercise of absurd equivalency, the Nobel Committee had given the 1973 prize to Kissinger and North Vietnam’s negotiator Le Duc Tho.

The 1980s brought the Peace Prize to brave activists like Adolfo Perez Esquivel of Argentina and Desmond Tutu of South Africa, as well as International Physicians for the Prevention of Nuclear War. In 1996, longtime opponents of Indonesia’s U.S.-backed genocidal occupation of East Timor had reason to cheer when the Nobel Peace Prize went to East Timorese heroes Carlos Filipe Ximenes Belo and Jose Ramos-Horta. The next year also brought good news when the prize went to Jody Williams and the International Campaign to Ban Landmines.

But in the “war on terror” world of this century, the Nobel Committee—far from an independent, evenhanded course—has steered the Peace Prize away from terrain where the U.S. government and its allies might appear to be anything other than noble peace-seekers. Relying on such a broken moral compass, the mission to assist “champions of peace” with the Nobel Peace Prize has lost its way.