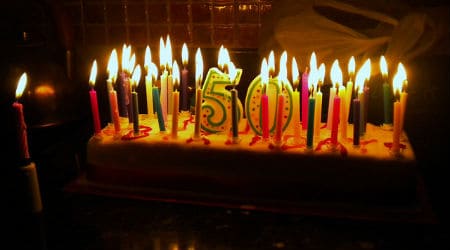 Medicare turns fifty next week. It was signed into law July 30, 1965 – the crowning achievement of Lyndon Johnson’s Great Society. It’s more popular than ever.

Yet Medicare continues to be blamed for America’s present and future budget problems. That’s baloney.

A few days ago Jeb Bush even suggested phasing it out. Seniors already receiving benefits should continue to receive them, hesaid, but “we need to figure out a way to phase out this program for others and move to a new system that allows them to have something, because they’re not going to have anything.”

Bush praised Rep. Paul Ryan’s plan to give seniors vouchers instead. What Bush didn’t say was that Ryan’s vouchers wouldn’t keep up with increases in medical costs – leaving seniors with less coverage.

The fact is, Medicare isn’t the problem. It’s the solution.

Its costs are being pushed upward by the rising costs of health care overall – which have slowed somewhat since the Affordable Care Act was introduced but are still rising faster than inflation.

Medicare costs are also rising because of the growing ranks of boomers becoming eligible for Medicare.

Medicare offers a way to reduce these underlying costs – if Washington would let it.

Medical costs continue to rise because doctors and hospitals still spend too much money on unnecessary tests, drugs, and procedures.

Consider lower back pain, one of the most common ailments of our sedentary society. Almost 95% of it can be relieved through physical therapy.

But doctors and hospitals often do expensive MRI’s, and then refer patients to orthopedic surgeons for costly surgery. Why? Physical therapy doesn’t generate much revenue.

Or say your diabetes, asthma, or heart condition is acting up. If you seek treatment in a hospital, 20 percent of the time you’re back within a month.

It would be far less costly if a nurse visited you at home to make sure you were taking your medications, a common practice in other advanced nations. But nurses don’t do home visits to Americans with acute conditions because hospitals aren’t paid for them.

America spends about over $19 billion a year fixing medical errors, the worst rate among advanced countries. Such errors are the third major cause of hospital deaths.

One big reason is we keep patient records on computers that can’t share the data. Patient records are continuously re-written and then re-entered into different computers. That leads to lots of mistakes.

Meanwhile, administrative costs account for 15 to 30 percent of all health care spending in the United States, twice the rate of most other advanced nations.

Cutting back Medicare won’t affect any of this. It will just funnel more money into the hands of for-profit insurers while limiting the amount of care seniors receive.

The answer isn’t to shrink Medicare. It’s to grow it – allowing anyone at any age to join.

Medicare’s administrative costs are in the range of 3 percent.

That’s well below the 5 to 10 percent costs borne by large companies that self-insure. It’s even further below the administrative costs of companies in the small-group market (amounting to 25 to 27 percent of premiums).

And it’s way, way lower than the administrative costs of individual insurance (40 percent). It’s even far below the 11 percent costs of private plans under Medicare Advantage, the current private-insurance option under Medicare.

Medicare should also be allowed to use its huge bargaining leverage to negotiate lower rates with pharmaceutical companies – which Obamacare barred in order to get Big Insurance to go along with the legislation.

Let me say it again: Medicare isn’t the problem. It’s the solution.