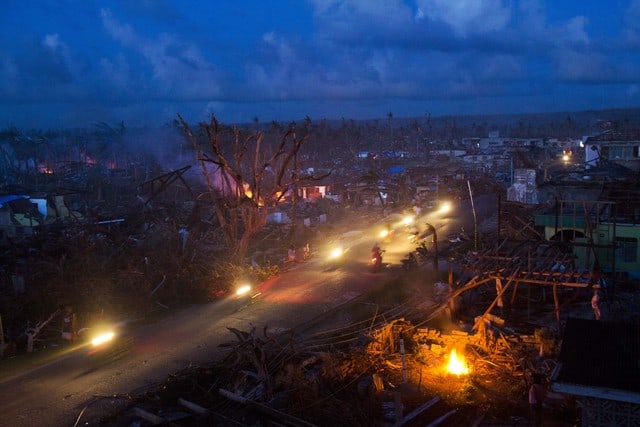 While the recent Intergovernmental Panel on Climate Change report is 95 percent confidentthat global warming is caused by human activity (there are very few areas of active research in which scientists are so confident), what falls out of the scope of the report is which humans are responsible. The Philippines, which is one of the poorest and least developed nations on the planet, has had little hand in creating the conditions that nurtured Typhoon Haiyan (or Yolanda, as it’s known locally), possibly the worst storm in recorded human history.

“It’s just shocking. We’ve never seen anything like this before,” Alex Montances said to me of Haiyan, which made landfall in the Philippines on Nov. 8. Montances is the Southern California regional coordinator for the National Alliance for Filipino Concerns and for him, the storm literally hit close to home. Montances’ mother is from Tacloban in the province of Leyte, the hardest-hit area that was already suffering from the twin effects of poverty and environmentally destructive mining operations.

People and infrastructure have been washed away, children have been orphaned, families have been separated, homes have been flattened and, as of this writing, heavy rainfall was still hampering the survivors’ ability to regroup, rescue others and simply live another day. The numbers are staggering. Nearly 10 million people are affected—about a tenth of the entire population of the Philippines. As many as 800,000 people have been displaced. Leyte’s provincial governor estimated that 10,000 people were dead, and while it is still too early to account for all the fatalities, even the current official count of 2,300 is horrifically high.

Filipinos from all walks of life are grief stricken. Montances told me, “This really affects me on a personal level. Three or four of my cousins are still unaccounted for.” Marycel Maxilom Campos, a Filipino working mother of two based in Southern California, told me that even though she didn’t have relatives caught in the typhoon, she “can’t help but cry watching how badly our country was hit and seeing families especially children washed away by the strong storm.” Campos, who has undertaken her own one-woman effort collecting relief supplies to send to the devastated areas, added, “My heart breaks for my countrymen.”

Naderev “Yeb” Saño, the Philippines’ climate negotiator for the COP 19 United Nations Framework Convention on Climate Change meeting in Warsaw, Poland, shared his trauma publicly. Saño made a measured plea to the international community to take seriously the impact of climate change, but then spoke personally, breaking down in tears several times. He referred to his own “agony” waiting to hear from his relatives in the region.

Saño wept, “I speak for the countless people who will no longer be able to speak for themselves after perishing from the storm. I speak also for those who have been orphaned by the storm.” The high-level delegate then went as far as to launch a hunger strike at the meeting “in solidarity with my countrymen who are struggling to find food back home and with my brother who has not had food for the last three days.” Sano’s brother, who survived the storm, helped gather the remains of the dead.

The traumatized climate negotiator challenged those who deny that global warming is real and man-made, saying, “To anyone who continues to deny the reality that is climate change, I dare them to get off their ivory towers and away from the comfort of their armchairs.” He added, “They may want to pay a visit to the Philippines right now.”

Before Haiyan hit, Typhoon Bopha, which devastated Mindanao province in the Philippines in December, was at that time the worst storm in recorded history with wind speeds of up to 161 mph. Now, initial measurements show that Haiyan was even stronger than Bopha, leading some to suggest such “superstorms” are the new normal, fueled by a rapidly warming planet. Montances cites anecdotal evidence from his parents who live in the region, saying “storms always hit that area—it’s a tropical country. But just they seem to be causing more and more havoc and they get bigger and bigger. … A lot of that has to do with climate change.”

Kuusela Hilo is a representative of PANAGHIUSA, a movement for human rights, peace and justice in Mindanao. Over the summer she participated in an international “solidarity mission” to deliver relief supplies to the survivors of Bopha (known locally as Pablo). She told me, “I will never forget the morning we gathered in Andap, New Bataan for a liturgical service. The tears just kept flowing. So many innocent people killed in one fell swoop. We were literally standing on a mass grave where more than 1,000 victims were killed due to the massive landslide triggered by Pablo.”

Hilo is now reeling from news of the destruction wreaked by Typhoon Haiyan. She told me, “Every few hours I am hearing more news from my friends and colleagues that they have lost loved ones and have still not heard from other loved ones in the Philippines. I have never seen my mom crying so much for the Philippines and the world.”

I asked Hilo if she saw any links between Western-fueled climate change and the victims of the storms. She told me, “Haiyan is a devastating example of how people in the Philippines and Southeast Asia are paying with their lives due to the exploitation of people and the plunder of resources. The reality is that we are all paying.”

What is happening in the Philippines is a portent for poor nations of the world. Tacloban is witnessing a deadly intersection of abject poverty, a local environment stripped of its natural resources, and a storm intensified to catastrophic proportions by global warming. Montances told me, “There is so much poverty and so many American and Canadian corporations are logging and mining in many areas of the Philippines, including Leyte, Mindanao and other places that were hit recently. When there aren’t any trees and the vegetation is taken away and there’s huge open-pit mining, the water has nowhere to go when [there] are typhoons and so it floods into the coastal towns like Tacloban. It just exacerbates the damage, and destruction, and the casualties.”

He concluded, “There needs to be continued pressure, and really, a mass movement of people around the world that are saying ‘you know what, we cannot allow this to happen. We really need our governments to work for the people, not the interests of private corporations.’ People in the Philippines understand that the urgency is now.”

Hilo echoed that urgency saying, “Hurricanes Sandy and Katrina should have been wake-up calls to people in the United States. Much remains to be done to change the global system that is driving global warming. It will take dramatic changes in the West if we are going to take on the fight against global warming.”

Despite the fact that we are already in an age of superstorms like Haiyan, many individuals and organizations are in fact doing their best to curb greenhouse gas emissions. In Canada, First Nations people are taking action to halt fracking operations. Students in the U.S. are calling on their universities to divest from the fossil fuel industry. International activists working with Greenpeace are currently being held in Russian prisons for challenging Arctic oil drilling. Even a former senior executive from the oil and gas industry has joined the fightagainst global warming.

Montances and Hilo are raising funds for survivors of Typhoon Haiyan through the National Alliance for Filipino Concerns, which works directly with grass-roots groups on the ground in the Philippines.

Sonali Kolhatkar is Co-Director of the Afghan Women’s Mission, a US-based non-profit that supports women’s rights activists in Afghanistan. Sonali is also co-author of “Bleeding Afghanistan: Washington, Warlords, and the Propaganda of Silence.” She is the host and producer of Uprising, a nationally syndicated radio program with the Pacifica Network.